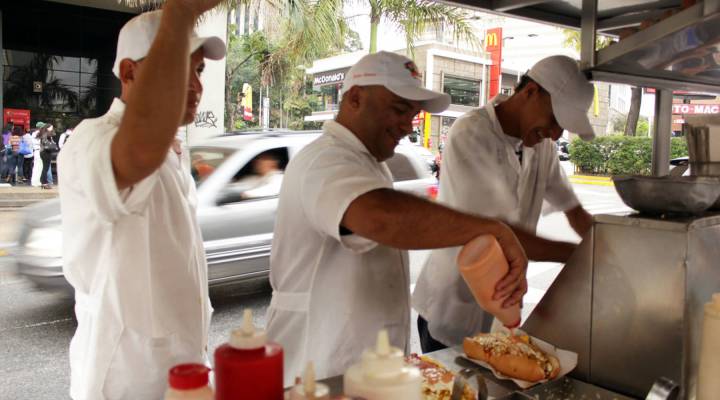 During my reporting trip to Venezuela, I didn’t have to venture far to experience firsthand the shortages and mega-inflation in the struggling petrostate. By some measures it’s the most miserable economy in the world.

It’s a challenging crisis to understand. But it turns out a trip to the local hot dog stand provided a ready gastro-economic primer. This is no ordinary dog. There’s the simple chili cheese dog, and then there is the Venezuelan monstrosity known as the pepito.

Like the country’s economic crisis itself, the Pepito’s issues come in layers. It begins with a big sub roll and a small hot dog.

“We add beef, chicken, chorizo and bacon and corn and cheese and onions,” said Francisco Peña, a Pepito street-seller three blocks from my hotel in Caracas. “It’s very distinctive.”

Peña actually left out a few toppings that turned up on my standard-order pepito: mustard, mayo, guacamole, ketchup and crushed potato chips.

For the record, I ate two (on separate days). On the first trip, it cost 900 local bolivars. Three days later, a new pricelist was taped over the earlier one. And one pepito went up to 1,050.

Why? Let’s explore the economic layers. A fundamental underlying problem — think of it metaphorically as the hot dog itself — is Venezuela runs almost entirely on producing and selling oil.

Historian Miguel Tinker Salas at Pomona College said before the petroleum era, Venezuela exported coffee and cacao beans for chocolate. There remains potential “in agriculture, in mining, tourism etc.,” he said. “But those were all sacrificed, because oil was the most expedient, the most quick and easiest to provide revenue.”

Layered on top of that, the government overspent its oil revenue. To provide for subsidized gasoline (the world’s cheapest) and a host of other services in healthcare, housing and education, the country borrowed. And it printed money, bringing inflation. The official estimate is around 180 percent; other estimates range from 400-700 percent. Local bolivars become increasingly worthless by the day.

On top of that, oil prices have fallen by two-third in two years, so there’s not enough petroleum revenue to buy imports (remember, the country hardly produces anything else). That includes the most mundane ingredients: cornflour, rice, milk, infant formula, Tylenol, toilet paper, condoms.

Even tomato paste for ketchup is hard to find, so Venezuela’s two ketchup producers have gone dark.

“For one of them, they cannot find the tomato paste,” said pollster and analyst Luis Vicente Leon. “For the second one, they are not obtaining the cap for the bottle, because it’s imported.”

Still, our pepito is loaded up with ketchup. Our seller may have purchased his from a black market seller. For many, the only way to obtain basic goods is find a bootleg source, through friends or closed chat groups on Facebook or WhatsApp. But for Pena, the black market has backfired on him personally.

His family lives in Maracaibo, far to the west of Caracas. Once he purchased food to bring to them personally. But along the way, soldiers stopped him and assumed he was a smuggler. So they took his food, and likely resold it themselves.

That would represent one more layer in Venezuela’s misery: corruption.