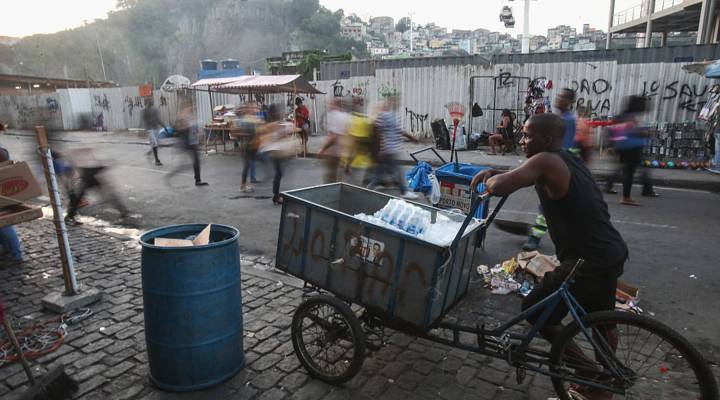 COPY
A vendor stands in front of the new gondola which travels to the top of the Providencia community, or favela, on September 23, 2015 in Rio de Janeiro, Brazil.  Mario Tama/Getty Images

A vendor stands in front of the new gondola which travels to the top of the Providencia community, or favela, on September 23, 2015 in Rio de Janeiro, Brazil.  Mario Tama/Getty Images
Listen Now

The economy in Brazil, Latin America’s largest nation, is in free fall.

Inflation and unemployment rates are rising, and citizens are demanding more from their government.

Recently, Brazilian citizens took to the streets to call for their president’s impeachment. Accusations of President Dilma Rousseff inaccurately reporting the Brazilian budget before her re-election in 2014 are floating around.

“Ten years ago Brazil was the darling of the developing world,” Davies said. “All of that has faded away and made this huge corruption scandal an economic crisis. This is an almost unrecognizable country from where it was 10 years ago.”