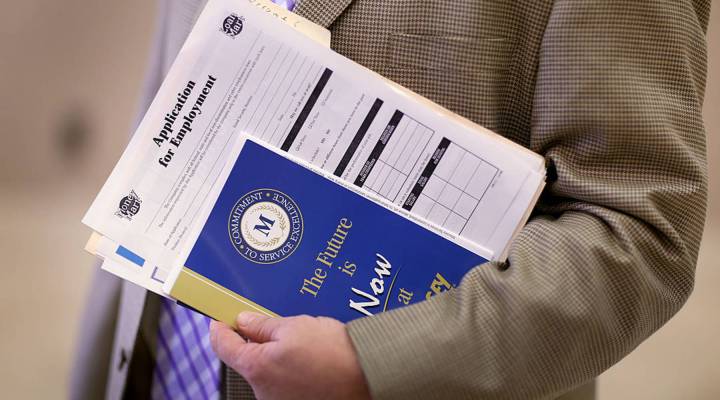 Is it time for economic optimism?

After a horrible start in 2016, the Dow Jones Industrial Average finally turned positive for the year today. Oil prices rebounded, too.

There was also news today that sounded both good and bad: weekly initial jobless claims were slightly up by 7,000. But, at 265,000 in total, they are well below levels that would cause alarm.

The initial jobless claims figure counts up the number of people who are filing new unemployment claims at any given week.

So what does that number tell us about how the economy is doing, and whether we should see it as yet more good news or signs of trouble?

Gary Burtless explains that the numbers tell us less about whether we should be optimistic about the economy, and more that we should not be pessimistic.

Burtless, who is an economist at the Brookings Institution, said jobless claims help signal the likelihood of recessions. “The last couple of recessions have been preceded by a suspicious increase in new claims for unemployment benefits,” he said.

It is notoriously difficult to forecast a recession, which is why jobless claims are so vital. “Almost all recessions take most professional forecasters by surprise,” said Burtless.

The case for optimism is that we have seen no big increase in jobless claims. They have been below 300,000 a week for 54 weeks, something not seen in decades, according to Reuters.

“It is a very good statistic. It shows that layoffs are at extremely low level,” said Gad Levanon, the chief North American economist at The Conference Board. “It’s one of the best leading indicators of employment… that suggests that the labor market and employment are on the right trajectory.”

Levanon said with employers showing no signs of slowing down their hiring, even wage growth is likely to accelerate over the next year or two. He predicts wage growth will be around 3 percent to 3.5 percent in 2017, a percentage point higher than today.

But that does not mean the economy will pick up more steam, Levanon said, because there are other factors – such as potential global economic problems, a strong dollar that’s hurting exports, and sluggishness in productivity – that are weighing down growth.

“There’s evolution going on, not a revolution where things are suddenly changing,” said Michael Montgomery of IHS global insight.

Montgomery said the U.S. economy is showing a slow and steady trajectory, which makes it susceptible to sudden shocks.

“There are no obvious thunderclouds, but the sky is a little overcast,” he said.