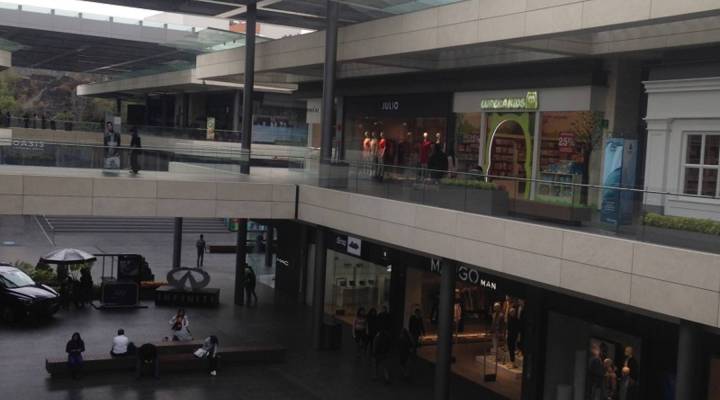 The new Oasis shopping center rises out of the leafy, cobble stoned Mexico City neighborhood of Coyoacan. Its sharp architectural lines, decorative pools and modern planters are impressive – so impressive that people stop in just for photos.

Vanya Cruz and her friend posed in front of an artificial waterfall during their visit from the town of Cuernavaca. “The mall is beautiful. It’s huge, it’s very elegant. I like it a lot,” she said.

There’s a boom in construction of shopping centers in developing countries across the globe. The flurry of activity might signal economic health, the wheels of commerce turning as they should. But some see these malls as just one more example of global inequality.

In 2015, 16 malls like this went up around Mexico City, and this year even more are in the works. But not everyone is so enthusiastic.  “Every mall that opens, I just feel that we have lost another opportunity to do something different,” said Roberto Remes, an activist and urban planning consultant in Mexico City. He believes the malls destroy informal economies, raise rents, create more traffic, and he worries about spaces that heighten inequality.

“People do not realize that this is not a public space,” Remes said. “Probably a poor person doesn’t think to be here…that’s part of the freedom we lose with malls.”

On a weekday at Oasis, people mill around the huge open space. Two visiting students from the Yucatan had stopped in to get some food. Luis Garcia Villanueva said he’s not a fan — he called the mall ostentatious, with its fancy stores like Cole Haan and Calvin Klein.   “I feel a bit uncomfortable because we just came to eat something and you see all the rest of it and we can’t afford to shop here,” Garcia Villanueva said.

Nigeria, China and Colombia are just a few of the countries where sleek commercial spaces are in the works. There’s a reason for the trend, according to Arlene Davila, an anthropology professor at NYU who just wrote a book about the global shopping center boom. “You have cheaper lands, easier conditions for getting permits…you have lax urban planning conditions,” Davila said.

The ease with which malls get approved isn’t a bad thing to some, like Jorge Lizan, a shopping center consultant who advises mall projects around the world. He sees the projects as public-private partnerships that improve countries.   “These big chains are able to provide lower prices than an informal market, but also they improve the quality of life of these communities, they provide a place for the people to gather, to socialize,” Lizan said.

Professor Davila called his logic into question.  “You’re talking about a privately, public policy becoming the de facto way people are organizing cities,” Davila said. “Who has access to deciding how our communities and our cities should run when you have megadevelopments that are basically unchecked, making all the decisions?”

Activists like Roberto Remes are fighting back. “I think we need to change the rules,” he said. This past December, Remes helped lead the first successful campaign against a major commercial project in Mexico City.

But for now, in countries the world over, there’ll be no shortage of mall selfie opportunities.