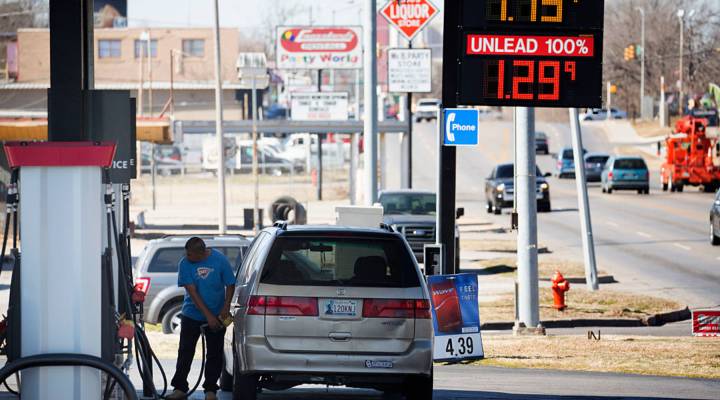 What did Diane Lim do the last time she got gas?

That’s right — Lim, who is vice president of economic research at the Committee for Economic Development in Washington, was so excited by $1.03 gas that she took a photo of the price. Her fill-up cost less than $10.

“Just like I share excitement about other things in my life,” she said, “I said, ‘Hey, this is a postable moment.”

The economist in Lim says this sort of saving is a lot different than, say, an income tax refund, because it’s immediate. Gas prices are in everyone’s face every day. So people are essentially comparison shopping while they drive. Gas prices across most of the U.S. are $2 a gallon less than in 2012, and the Marketplace-Edison Research Poll tried to gauge how helpful they’ve been to people’s budgets.

Lim admitted she’s in a good spot, herself, and doesn’t really have to worry about money. But a lot of the people surveyed by the Marketplace-Edison poll said they do. Almost 40 percent of the young people surveyed said lower gas prices helped them out a lot.

Glen Garris is a 22-year-old hotel bellboy in Phoenix. He gets paid by the hour, a little more than minimum wage. He and his girlfriend live with his parents.

“We have to budget around everything we want to do,” he said. “We want to go on trips, but then we have to see how much it’s going to cost altogether before we can actually start to plan the trip. So, it kind of makes it a little bit harder on minimum wage.”

Garris said he notices gas savings because he can actually do more things and enjoy his road trips.

More hourly employees, compared with those who on salary, said lower gas prices help their budgets a lot. Jerome Cullison is 29 and works for a landscaping company in Phoenix. He says he drives about 30 miles to work every day, so as prices directly affect the money he takes home.

“I’m just a regular person that does a daily job,” he said. “If you can’t afford gas, how are you supposed to get to work? Four dollars a gallon compared to two bucks for a gallon of gas is a big, huge difference. You know, I’m just a normal, average American.”

How you get paid and how you get there makes a big difference in what low gas prices mean for a normal, average American.