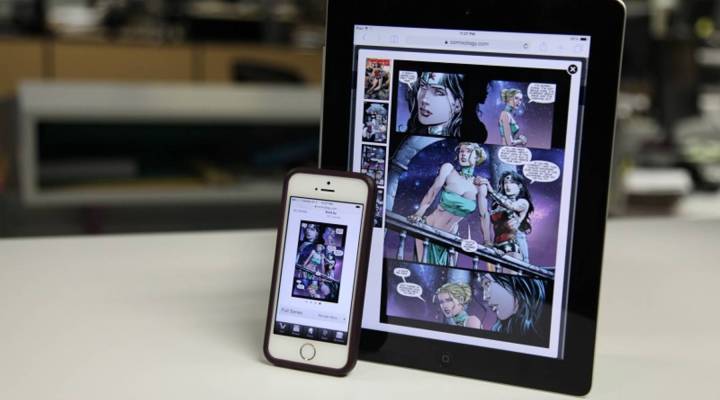 COPY
Traditional comics pages make for good reading on a tablet screen, but shrink those panels down to mobile phone size, and all kinds of text and imagery can get lost in translation.  April Baer/Marketplace

Traditional comics pages make for good reading on a tablet screen, but shrink those panels down to mobile phone size, and all kinds of text and imagery can get lost in translation.  April Baer/Marketplace
Listen Now

Comics, along with everything else that used to be on dead trees, have gone digital. Problem is, getting those digital images just right can be hard. Now, a new digital venture is getting off the ground. Its mission: to create a new way to experience comics.

Sales of digital comics in 2014 topped $100 million, about the time Amazon acquired the main online sales hub, ComiXology. But seriously, have you ever tried reading a digital comic book? Former Dark Horse Comics editor Jim Gibbons notes it’s not bad if you download to a tablet.

“The iPad screen is comparable enough to a comic book page that it’s easy enough for me,” Gibbons said. “The whole page comes up. You can read the whole page as if it were in a book in front of you, and then you swipe to the left, you get to the next page, the whole page is there.”

But just try to do the same comic on your smart phone. That full page, with all its panels, can be hard to take in. “What we wanted to do,” Gibbons said, “is say ‘OK, let’s not try and cram a comics book page onto a phone screen and make it work. Let’s make comics specifically for the size of a phone screen.'”

Gibbons has signed on as senior editor for a new mobile venture called Stēla Comics. The company is developing brand new titles written and drawn to be read on a smart phone. On the beta version, it’s compact. You read one panel, move down. Read another, down some more.

It’s not hard to imagine whipping the phone out, one-handed, in the grocery line, reading a few pages. And it’s the perfect size for sneaking an undercover read in after bedtime, just like you used to.

Apps like this have taken off in Asia. One of them, known in the U.S. as LINE Webtoon, has thirty million monthly users.

Art from an upcoming Stēla title by Michael Avon Oeming.

I decided to take Stēla for a test drive in a tough room.  Jason Leivian is the owner of Floating World Comics, a shop in Northwest Portland that describes itself as a store for people who still like going to stores. He scrolled through a Stēla sword and sorcery epic, titled “Inheritance.”

“I’d say this format is definitely better,” Leivian said, “but there’s still something about it. The screen is small. You don’t see the full page all at once. Somehow I just lose interest. I don’t know what it is.”

Leivian adds there’s one thing he already likes about Stēla: its business model. The company is offering its artists and writers upfront page rates that are competitive with bigger publishers. “Any new publishing company offering a page rate up front is a good thing,” Leivian said, “no matter what format.”

Stēla is also offering artists and writers a profit split on the back-end.  Gibbons is hiring both mobile-native artists and some widely-read print talent — people like Michael Avon Oeming. He’s done some writing for Marvel titles like Thor, but is best known among comics readers for indie titles like Powers, a mash-up of superhero narrative with police procedural. “I’ve always been interested in how do you get more comics and two more people’s hands?”  Oeming said. “I remember early on looking at the Archie books at the checkout counters. I was like ‘Why aren’t there other comic books here?'”

Oeming is young enough that he’s on Tumblr, but old enough to remember the first generation of digital comics. The internet was new and everyone was scrambling.  “We weren’t too concerned about screen size,” Oeming said. “Because everyone had a big giant square screen.”

Overall comics haven’t changed much until now. Oeming says he’s excited about Stēla’s concept.  For consumers, the service will deliver about eight fresh pages every weekday.  That’ll cost $4.99 a month for starters… with the hope customers will be hooked.