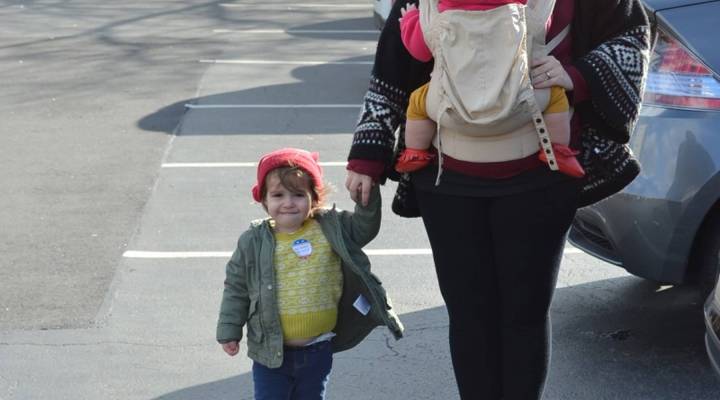 COPY
Genevieve Leavitt says she thinks a lot about dressing her  4-year-old daughter Stella and 4-month-old son Dexter in clothes that are gender neutral.  Kate Sweeney

Genevieve Leavitt wheeled a shopping cart loaded with groceries out of a midtown Atlanta grocery store, her infant son Dexter taking it all in from his baby carrier in brightly-dressed style. His outfit: green bodysuit, white and gray-striped pants with lace around the ankles, and bright red moccasins.

The lacy pants and the “moccs?” They once belonged to Dexter’s big sister. But Leavitt didn’t dress him in hand-me-downs just to be thrifty. She and her husband make a concerted effort to dress both their children in clothing that’s gender-neutral.

“It’s actually something I think a tremendous amount about,” she said. “I definitely shop in both sections for both kids.”

Leavitt is part of a small but growing trend of parents looking for kids’ clothes that don’t scream “girl!” or “boy!” via their ruffles or sports themes.

And retailers are starting to take note.

At a recent tradeshow featuring gifts and home furnishings in downtown Atlanta, Sarah Moore paged through a rack of brightly-colored bibs with an expert flourish. “These here?” she said. “The whole animal print idea is definitely something that’s hip and trendy.”

Moore is a sales assistant with Bumkins, a company that makes mostly bibs and baby clothes. The line recently did a total re-brand, downplaying the old pink and blue in favor of these unisex prints. Other companies that have gotten the gender-neutral memo include The Gap, with its E.D. line from Ellen Degeneres  “for tomboys, girly girls, athletic girls, and everything in between,” and a number of small start-up brands with names like Handsome in Pink and Princess Awesome.

Who’s dictating all this pre-K chic?

“Millennials,” said Sheri Moskowitz, who heads up sales for Bumkins. “In general, we’re just trying to target them.”

The fashion industry has recently been blurring gender lines in clothes for young adults.

And now, “they are the ones having babies; they’re the ones dictating the trends and demanding us to change our ways,” said Moskowitz. “They love it and they wear it, and then they’re going to dress their little accessory in it.”

In other words, she said, it’s all about making your child fit stylishly into your world.

For mother Genevieve Leavitt with her son Dexter, it’s about her kids’ world, too. “I want them to grow up knowing they’re accepted, whatever their preferences are.”

That may mean pink for boys, blue for girls, or none of the above.