COPY
Democratic presidential candidate Hillary Clinton meets with workers during a factory tour at Detroit Manufacturing Systems on March 4, 2016 in Detroit, Michigan. Voters in Michigan will go to the polls March 8 for the State's primary. Scott Olson/Getty Images

Democratic presidential candidate Hillary Clinton meets with workers during a factory tour at Detroit Manufacturing Systems on March 4, 2016 in Detroit, Michigan. Voters in Michigan will go to the polls March 8 for the State's primary. Scott Olson/Getty Images
Listen Now

Michigan has 206 delegates at stake in its presidential primary on March 8 — 59 for Democrats, 147 for Republicans.

Another salient number for Michigan is 14.9 percent. That’s how high unemployment rose in Michigan in the Great Recession in 2009. And for years after that, Detroit had the highest unemployment rate among the 50 largest cities in the U.S. — at one point approaching 25 percent.

The Great Recession made Michigan synonymous with “economic devastation,” as the auto industry faced collapse and was rescued by the federal government, cities declared bankruptcy, home foreclosures soared, residents left the state, and urban neighborhoods depopulated.

But, much of the state has now bounced back, said Michigan State University economist Charles Ballard, who directs the State of the State Survey.

“We’ve added about 450,000 jobs since the economy bottomed out in 2010,” said Ballard. “And that’s brought down the unemployment rate to about 5 percent.”

The Big-3 U.S. automakers — GM, Ford and Chrysler — are booming again, though they’ve ramped up production with more automation and fewer workers. And, those workers on average make less money, due to union givebacks and a two-tier wage structure to which the UAW agreed before the Great Recession.

Charles Ballard said that for political candidates, Michigan is no longer a solidly blue-collar, union-card state.

“John Kennedy, when he campaigned in 1960, had to march in Detroit on Labor Day,” said Ballard. “Now, we’ve got a lot of tech and IT, business services of all sorts. We have a lot of new jobs in health care.” And he said commercial and residential development, along with a vibrant startup-culture, have taken off in up-and-coming neighborhoods of Detroit.

Alan Berube, a senior fellow at the Brookings Institution’s Metropolitan Policy Program, said that Michigan’s increased economic diversification — from the previous over-reliance on auto-related manufacturing — will make the state more resilient to the next economic downturn.

But he said the recovery has been uneven, benefiting suburban and rural parts of the state much more than distressed urban areas where many minorities live. For those communities, he said — in cities like Detroit and Flint — “the loss of middle-class jobs accessible to people without much more than a high school education” has been devastating. 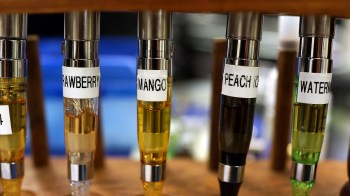