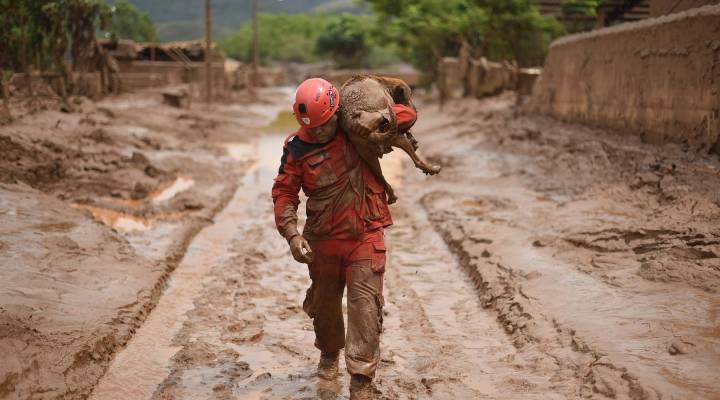 COPY
A fireman rescues in Paracatu de Baixo, Minas Gerais, Brazil on November 9, 2015 a dog that was trapped in the mud that swept through the Village of Bento Rodrigues. The tragedy occurred when waste reservoirs at the Samarco iron ore mine burst open, unleashing a sea of muck that flattened the nearby village. Douglas Magno/AFP/Getty Images

A fireman rescues in Paracatu de Baixo, Minas Gerais, Brazil on November 9, 2015 a dog that was trapped in the mud that swept through the Village of Bento Rodrigues. The tragedy occurred when waste reservoirs at the Samarco iron ore mine burst open, unleashing a sea of muck that flattened the nearby village. Douglas Magno/AFP/Getty Images
Listen Now

The failure of two wastewater dams killed 19 people, and Brazilian police have now said the mining company operating the dams, Samarco, should be tried for homicide. Samarco reached a settlement with Brazilian authorities last week requiring a minimum of $2.5 billion in restitution through 2030.

But it’s been a tough few years for Brazil. The country’s currency, the real, is almost a third what it was last summer. The oil industry has been mired in scandal involving the country’s president.

Estelita Carazzai, a correspondent for Folha de Sao Paulo, was at a news conference about the scandal when her newspaper told her about the dam collapse outside the town of Mariana.

“In the moment that Mariana happened, we had this huge political crisis,” she remembered. “We were only talking about impeachment and corruption and so, you know, so it was really not the focus of the gatekeepers of the country like the press or the politicians.”

“The majority of our commercial balance comes from exporting our commodities, agricultural and mining industry,” she said, “and oil is also really important.”

Drastic drops in the price of iron ore and crude oil have hurt. But Brazilian mining operations, like Samarco, the company responsible for the destroyed dams, need to keep mining. Environmental groups said Samarco ignored warnings as it kept producing. They argue the government allowed it because it needs the mining industry’s revenue and jobs.

Paulo Sotero, director of the Brazil Institute at the Wilson Center, said he’s not surprised by the criticism.

“This is the implication, that we were rushing,” he said. “We were under pressure to increase production and we did not take the necessary precaution, we didn’t listen as we should to the people that were warning about a possible disaster.”