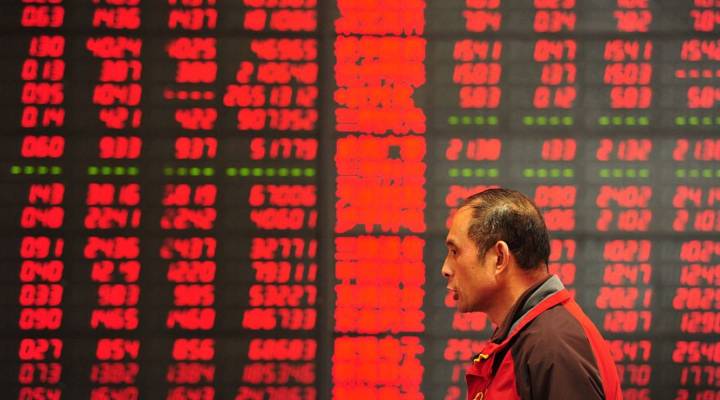 COPY
An investor makes his way in front of a screen showing stock market movements in a securities firm in Fuyang, east China's Anhui province on March 2, 2016. Shanghai stocks closed more than four percent higher on March 2 as investors stormed into the market on hopes of further measures to stimulate the slowing economy, dealers said.  STR/AFP/Getty Images

An investor makes his way in front of a screen showing stock market movements in a securities firm in Fuyang, east China's Anhui province on March 2, 2016. Shanghai stocks closed more than four percent higher on March 2 as investors stormed into the market on hopes of further measures to stimulate the slowing economy, dealers said.  STR/AFP/Getty Images
Listen Now

Iron ore prices spiked 17 percent Monday after China announced it would target a minimum of 6.5 percent of annual GDP growth over the next five years.

The Chinese government said in a key meeting over the weekend that it will spend more money in certain sectors, such as transportation. It also mentioned reforms, such as reducing restrictions on its currency with the goal of a fully-convertable yuan by 2020.

The most welcomed headline, though, was the 6.5 percent annual growth figure. So much so, that it sent optimistic investors toward iron ore, a key ingredient in steel.

But is everyone, from investors to the Chinese, being overly optimistic?

“Is [the iron ore rally] sustainable? Probably not,” said Dan Rohr, who is a director of basic materials equity research at Morningstar. “We expect Chinese steel demand to decline, as China builds a lot of highways, skyscrapers and manufacturing plants, but fewer than it did in years past.”

Fewer, because China has built so much already, that there simply can’t be a huge spike in demand for raw materials, Rohr said.

Still, the Chinese government over the weekend promised more money spent on building roads and railways. But Economist Barry Bosworth of the Brookings Institution, who studies the Chinese economy, is not persuaded that such plans can get China to 6.5 percent growth.

For one, the Chinese, who save at high rates, have to be persuaded to spend more, Bosworth said.

But, even if China were to do everything right and manage to grow at high rates, there is also the question of whether China’s numbers can be trusted.

“I don’t think their numbers are exact to the last decimal place,” said Nicholas Lardy of the Peterson Institute for International Economics.

But the inexact numbers are due less to China  cooking its books and more to its economy rapidly changing.

“You can’t just look at the headline number. You [have to] dig beneath the surface and see what else is going on,” Lardy said.

What Lardy sees beneath the surface is a still-growing China. But, without major reforms and the opening up to private competition of major sectors such as banking, telecommunications and oil, Lardy said China cannot continually grow at a minimum of 6.5 percent.