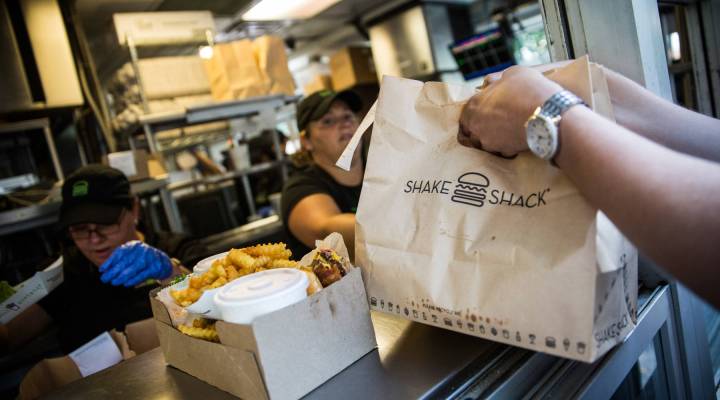 What’s in a burger?

The answer for an increasing number of consumers is high-quality, humanely raised beef, and fresh add-ons.

The so called “Better Burger” market is part of the bigger Fast Casual trend. And, Shake Shack is among its most headline-grabbing representatives with its calling-card long lines, especially at its New York locations. The company will release its fourth quarter earnings today after the markets close.

The popular New York franchise has expanded to 86 locations globally, according to the company’s latest figures. It plans 22 more this year, including its first entry into California, where In-N-Out reigns.

The good news is that Shake Shack’s sales are up. But it has had a rollercoaster ride on Wall Street since its stock debuted a little more than a year ago. Its stock price shot up to more than $90 per share last summer, and since has plummeted to half that amount.

“This is one of the best examples of hype pushing the stock performance,” said industry consultant Aaron Allen, adding that Shake Shack getting its start in New York was a big contributor to the hype. After all, Allen added, the company’s valuation in the billions of dollars, when it was a tiny fraction of McDonald’s size, was optimistic, because the burger business is a zero-sum game.

“Hamburger consumption in the United States is not increasing. in fact, our consumption of beef has started to decrease,” Allen said.

For Shake Shack to continue to grow, others — especially its direct competitors, such as Five Guys — would have to shrink, Allen said.

Still, there is a change happening in the consumer, who is increasingly turning away from cheap fast food and toward higher quality, said consultant David Henkes of Technomic.

“The consumer is in a posltion right now where they’re saying they’re willing to pay a little bit more for a very high quality burger in a little bit more of an upscale, but still fast, environment,” Henkes said.

That trend means there is a bustling market that Shake Shack is doing a great job in attracting, Henkes said. The company not only offers high-quality burgers, but also an attractive setting, an emphasis on customer service, and even its own house beer.

But the bustling high-end burger trend also means the market is increasingly crowded, with plenty of competition, he said.