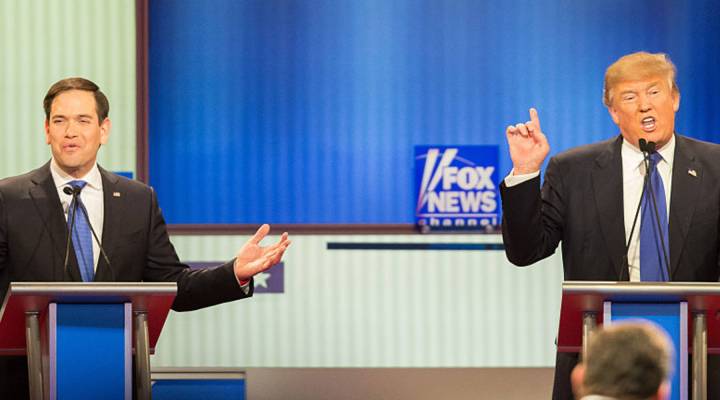 Last night’s GOP debate was filled with whacks at Donald Trump, including a mention of his failed training program Trump University and it’s D- (or is A+?) rating from the Better Business Bureau. There was even a kerfuffle over whether or not the BBB faxed over a copy of the program’s A rating during the debate. For its part, the BBB said it did not, and Trump University — since renamed The Trump Entrepreneur Initiative — has had “no rating” since September 2015 because it is out of business.

The program is facing a class-action lawsuit from unhappy students who paid as much as $60,000 for courses. In a recent filing, Trump admitted to not actually handpicking instructors as advertised, The Intercept reported Friday.

All that drama aside, what exactly does a D- from the BBB mean? And how does a company end up with one? Well, the BBB wouldn’t say anything more than what it’s already disclosed to the public: “BBB ratings are dynamic and are based on an algorithm that takes into consideration a wide range of marketplace issues.”

These include 13 different elements, including the number of complaints the BBB has received, how responsive the business is to those complaints, how long the business has been operating and if the business has had government intervention or transparency issues.  As with a traditional grade system, A+ is the highest grade a business can receive and F is the lowest. A CNN Money investigation into the BBB  last year found 100 businesses that had A- or higher grades also faced problems with government regulators, including shutdowns and lawsuits.

To be clear, the BBB is not a government entity despite its official-sounding name. It’s a nonprofit that acts as a mediator between consumers and business. These companies can also pay for a BBB accreditation (although, a lack of accreditation is not supposed to affect the grade issued). Trump University is not a BBB-accredited company.

A look at the BBB page of  The Trump Entrepreneur Initiative shows the program, which boasted real estate riches for people who took the courses, had one complaint filed with the BBB from a customer seeking a reimbursement of $40,000 for the program, citing issues with the mentorship and quality of advice given. The program wrote back that the customer was not eligible for the refund and the matter was marked “closed.” (The BBB actually published a blog in 2012 warning consumers about similar real estate programs.)

Other high-profile businesses with a poor BBB rating? Coffee retailer Starbucks, which also has a D –, for lack of response to customer complaints, and car-hailing service Uber, which has an F for the same reason.