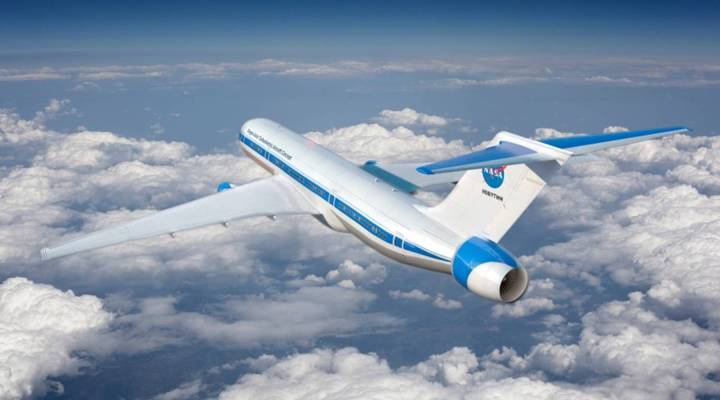 At the Cleveland Hopkins International Airport, roughly 150 flights take off every day. These are often loud, gas-guzzling passenger jets that leave exhaust trails in their wake.

But right next door at the NASA Glenn facility, there’s research underway that could change a lot of this.

“We’re trying to get a 737 to fly using electric motors,” said Ralph Jansen, an engineer at NASA Glenn.

Jansen and his colleague, Cheryl Bowman, sit in a lab filled with monitors, gadgets, and wires. Bowman said in 10 years, they hope to have a hybrid aircraft that carries ten passengers…but it makes sense to aim high for a 737, that’ll carry at least ten dozen.

“Because right now those are the ones that have the highest usage, the highest fuel burn, so the highest economic impact on the country as a whole,” he said.

Picture a 737 with electric engines under each wing that also generate power for a fan built into the tail, and you’ve got the conceptual gist. Jansen said it would cut fuel consumption in passenger jets by 12 percent. “Which is particularly difficult because you need to make electric parts very light and very efficient.”

While there’s still more work ahead, Bowman said there’s a bit of a “space race” feel to it, given the global interest in hybrid tech. “Places like the European Union invest a lot of money in making Rolls-Royce aircraft engines made out of Great Britain, and AirBus based out of France, into major competitors,” Bowman said.

You might think that better fuel efficiency will save airlines money, and therefore lower ticket prices. But airline industry analyst Robert W. Mann Jr., based in New York state, said those savings aren’t necessarily passed on to the customer. “It’s really the marketplace that really drives fares, not so much the production costs,” explained Mann.

“What we see today for example, is despite much lower jet-fuel costs, the marketplace is still commanding higher fares in some cases,” he said.

Still, jets that are quieter, more fuel-efficient, and have fewer emissions than today’s aircraft pack appeal.

But to put an air-brake to your enthusiasm, NASA estimates  the earliest rollout for a hybrid passenger jet will be 20 to 30 years. So expect a significant delay before takeoff.