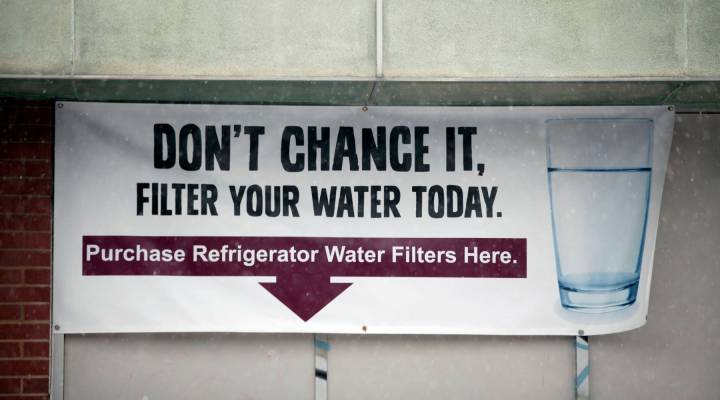 COPY
A sign on a the front of a building warns residents to filter their water in Flint, Michigan. Bill Pugliano/Getty Images

A sign on a the front of a building warns residents to filter their water in Flint, Michigan. Bill Pugliano/Getty Images
Listen Now

The Senate reached a deal this week to provide $250 million in aid to Flint, Michigan and other communities with crumbling water infrastructure. The legislation will probably be up for a vote next week and highlights that the problems revealed by Flint’s water crisis are not as rare as many would hope.

The bipartisan deal includes $100 million for drinking water emergencies, plus $50 million for health programs and $70 million to go toward loans for long-term fixes to community water systems.

Kelly Brumbelow, who teaches civil engineering at Texas A & M, said he’s glad Congress is doing something but that the problem is much bigger.

“Just in the state of Michigan, there’s an estimate of over $13 billion of water infrastructure needs for the next 20 years,” he said — not to mention the hundreds of billions needed for the rest of the country.

The Value of Water Coalition just finished polling Americans on this issue and found 95 percent of respondents said it’s important to invest in water infrastructure.

“The public has spoken loud and clear,” said Radhika Fox of the US Water Alliance, part of the Coalition. “They’re ready and willing to invest and ensure safe and secure water service so we hope that public officials step up.”

However, only 60 percent of those surveyed are willing to pay for that investment with higher water bills.