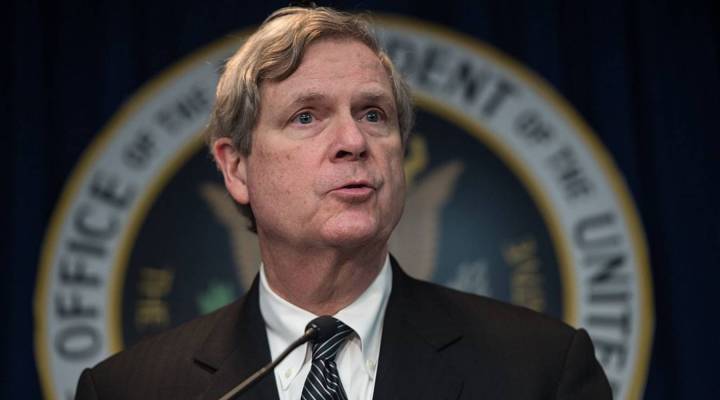 COPY
Secretary of Agriculture Tom Vilsack on battling poverty, and all that comes with it. NICHOLAS KAMM/AFP/Getty Images

Secretary of Agriculture Tom Vilsack on battling poverty, and all that comes with it. NICHOLAS KAMM/AFP/Getty Images
Listen Now

In America’s rural communities, poverty, health and education gaps, and a striking increase in opiate addiction are challenging social services and the budget. News of the increasing numbers of deaths among middle-aged Americans and the high rates of opiate overdoses are in the news, and since 2011, the Obama administration’s Rural Poverty Coalition has been tackling the multi-generational issues that come with providing social services to rural America.

Secretary of Agriculture Tom Vilsack has headed up the coalition since its introduction. Secretary Vilsack experienced the pain of coping with a family member who abuses drugs and alcohol firsthand — his mother struggled with addiction — and feels strongly about providing a multi-tiered approach to combating poverty and addiction, which he says go hand in hand.

“The goal, I think, is first and foremost to reduce the number of children who are living in homes at or below the poverty level,” Vilsack said. “That does involve the importance of access to early childhood education, making sure that they get proper nutrition at schools, and overarching all that is the concern that we all have about the expanding opioid and heroin use in rural areas. “

Collaboration with the education and medical communities is key to making sure that rural poverty doesn’t disproportionately disadvantage children, Vilsack says. But to truly broaden opportunities for young people living in rural communities, there needs to be a financial trickle down — that means more and better-paying jobs, and direct solutions for the opiate and alcohol related deaths that are more rampant in remote areas.

Substance abuse is a major focus, according to Vilsack. In addition to resources for families who may be seeking behavioral and medical treatment, he advocates preparing first responders to deal with overdoses and abuse.

Vilsack is pushing for wider access to NARCAN, which can reverse a heroin overdose. He is encouraging first responders to carry the drug and working towards easier over-the-counter access.

As for continued aid to rural communities across the country, Vilsack is banking on funding from the Obama administration’s discretionary budget. It’s these funds, he says, that will allow the opening of behavioral services centers and the ongoing care rural communities need to pull residents out of poverty.

“The ability to expand education and prevention information … there are a lot of different ways in which that money can make a big difference,” Vilsack said. “We’re advocating for it even though it’s not part of our budget because at the end of the day it affects the people we have responsibility for, which is the folks that live, work, and raise their families in rural communities.”

Click the SoundCloud player below to hear the extended interview featured in Marketplace Weekend.