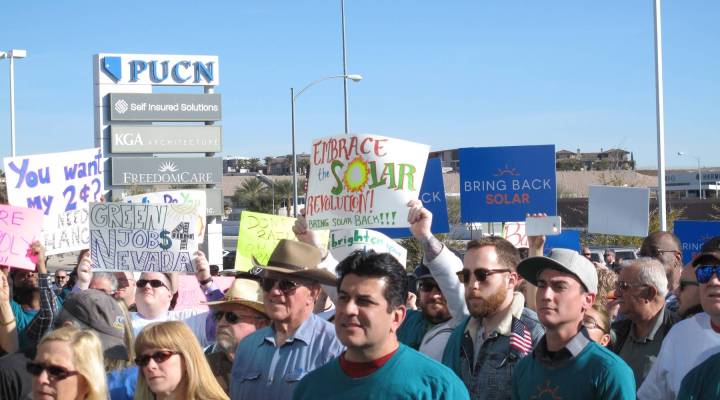 It was a cloudless morning, and two backyard energy moguls in Las Vegas were surveying their tiny empires.

Stewart and Matz love to get together in Stewart’s yard, each with a laptop, to check on whose solar panels are putting out more juice.

When it comes to rooftop solar, Nevada had the fastest growth in the U.S. In 2015, the state saw a new customer sign up every 40 minutes, on average. And at the heart of that growth was a pitch from solar companies, utilities and elected officials: put panels on your roof, and you’ll save money by buying less electricity. More, if you generate more electricity than you use, the utility will buy it — for the same price you pay for its power.

“My power and Dale’s excess power goes right to my neighbor,” Stewart said. “And it gets used instantly by them, and they’re billed for it.”

If you buy panels, you can pay yourself back quickly. If you sign a lease agreement with a company like Solar City, the company will put panels on your roof, and you save on your electric bill without putting up a single dollar.

What makes it all work is that dollar-for-dollar exchange, called net metering.

“Net metering is really the magic of how solar benefits a customer,” went a consumer education video made by NV Energy — Nevada’s largest utility.

“We are allowed to take care of customers by giving you one kilowatt hour for every kilowatt hour you give us. It’s one-for-one trade, which is really great, you’re essentially giving it to us at retail value.

The company posted that sunny video on YouTube in the summer of 2015. But even as it evangelized to customers about the virtues of net metering, NV Energy was pushing for changes that would cripple the rooftop solar industry.

In December, the Nevada Public Utilities Commission eliminated one-for-one net metering for residential solar customers. Over several years, the rate NV Energy pays solar customers for their surplus electricity will be cut by 75 percent. There went the business model for rooftop solar.

This month, more than a thousand angry consumers and industry workers demonstrated outside the PUC’s Las Vegas offices. But the noise outside did not stop the agency from reaffirming a controversial part of its decision. The net metering rules won’t just apply to new solar customers, but the 17,000 customers who have already purchased or leased panels. What seemed like a wise investment last year, has turned out to be an expensive mistake.

NV Energy did not respond to requests for comment. The PUC’s director of regulatory operations, Anne-Marie Cuneo, wouldn’t talk either. But on a local public television program, Cuneo said residential solar customers were being subsidized by non-solar customers.

“Come on, that’s misleading,” Lyndon Rive, the CEO of Solar City, said in an interview. “No one would go solar in their right mind, if they knew net metering was going to go away.”

Solar City finances and installs residential solar systems in 18 other states. It shut down sales in Nevada and laid off 500 employees after the PUC’s decision in December. Rive and other industry leaders are gathering signatures for a ballot referendum that he says would allow the industry to come back.

“I don’t think people quite understand it,” he said. “This decision has decimated the entire industry. There is no more rooftop industry in Nevada.”

The residential solar industry’s share of the energy market in the U.S. is tiny. Still, rooftop solar has grown year over year, nibbling away at the margins of utility profits.

“In the long term, rooftop solar is a pretty disruptive threat to the utility business model,” said Cory Honeyman, an analyst at GTM Research, a solar energy market research firm. He said Nevada’s action is unusual — most other states have protected existing solar customers from rate changes like this.

He said Nevada shows how utilities are learning to protect their profits from rooftop solar.

“What happened in Nevada was very much unprecedented, and it should be a wake up call for everyone in the industry to understand the risk and likelihood of this happening again,” Honeyman said.

So how much is net metering worth to a homeowner? Richard Stewart, that guy with a laptop in his backyard, paid $30,000 for his solar array. But with the PUC’s change in rates, he’ll get back only half his money in 20 years.

“This was a dollar and cent decision for me, based on the rules at the time,” he said. “If I’d know they were going to do this, I wouldn’t have invested.”