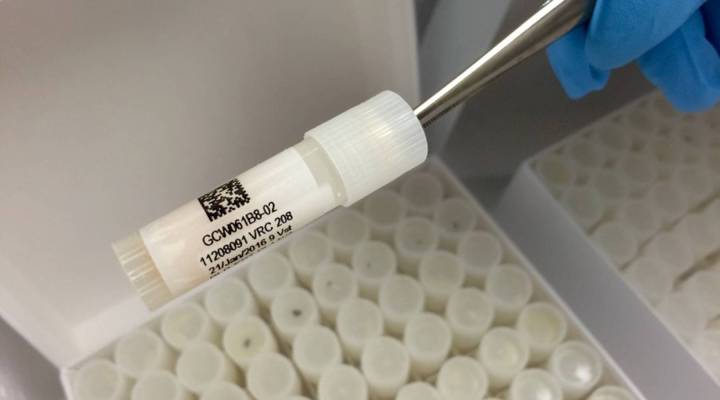 In a nondescript office park outside Atlanta, researchers at Emory University’s Hope Clinic are running tests on blood and plasma.

The samples come from people who received an experimental Ebola vaccine, which made it to a final efficacy trial in West Africa. Unfortunately, it arrived a little too late. “We were unable to have enough cases, which is a good thing,” said Emory’s Dr. Mark Mulligan. “We’re glad the cases went down, but for the vaccine, we didn’t get to answer that all important final question: Does it protect?”

Mulligan helped lead some of the early human studies of this vaccine, now licensed to the British drug company GlaxoSmithKline. It’s one of two vaccines that actually made it to a final trial during the Ebola outbreak, which infected nearly 30,000 people and killed more than 11,000, according to the World Health Organization.

A division at Emory is leading a team of 10 labs across the country studying the blood of four Ebola patients treated at Emory’s hospital. The goal is find antibodies and immune cells that help a person fight off the Ebola virus.

On Thursday, researchers announced in the journal Science they’ve tested a promising new therapy to treat Ebola patients. The report details how scientists found two antibodies in a survivor of an outbreak back in 1995. The researchers, among them scientists at the U.S. National Institutes of Health, say those antibodies were able to help neutralize the disease in monkeys that had been exposed to Ebola.

But this potential therapy isn’t considered a vaccine to prevent people from getting the disease. In fact, there’s still no licensed Ebola vaccine, even though governments rushed to fast track some potential candidates during the outbreak.

By the time some of those vaccines were ready for trials in Liberia, Sierra Leone and Guinea, the three countries hardest hit by Ebola, the number of new cases  had declined.

Despite the effort to find a cure, there’s still no licensed Ebola vaccine. Now that the outbreak is over, the research community that sprung to action in 2014 is faced with a predicament:  How do you find a cure for a deadly diseases when you’ve been successful at stopping it?

The other vaccine that made it to a large efficacy trial in West Africa, licensed to a big American drug company, Merck, did get some early evidence that it protects against Ebola.

Just a few weeks ago, the global vaccine alliance, GAVI, announced it would pay Merck $5 million to help the company with the last stages of development.

Merck’s Dr. Julie Gerberding, speaking on a panel at the World Economic Forum, said the deal would help bring the vaccine through final licensure. Even that’s not expected until sometime next year.

Emory’s Dr. Mulligan said all of the other vaccines can still get licensed without another outbreak.

The University’s researchers are still monitoring those who were part of the GSK vaccine trial. Mulligan said the lab is also about to start work on another vaccine trial, a Johnson & Johnson product that just squeaked into West Africa for early studies.

To prove that final question – does it protect – Mulligan points to what’s called the animal rule. Under the rule, researchers will have to show in humans that the vaccine is safe and produces a good immune response. They’ll also need to show the vaccine protected animals from infection, since it wouldn’t be ethical to expose humans to Ebola.

Dr. Anne Schuchat is deputy director of the Centers for Disease Control and Prevention, which ran vaccine trials in Sierra Leone.  She said the animal rule is necessary for fighting diseases like Ebola.

“They might or might not be perfect predictors of what happens in humans,” Schuchat said, “but for things that are quite rare or things like bio-terrorist agents, the animal studies can be very important.”

Back at Emory, a different division is leading a team of ten labs across the country studying the blood of the four Ebola patients treated at Emory’s hospital.

With an $8 million grant from the U.S. Department of Defense’s Defense Advanced Research Projects Agency, researchers are trying to identify antibodies and immune cells, the things in the body that help a person fight off a disease. The group hopes to produce more of those antibodies in cell cultures and test their ability to neutralize the Ebola virus.

“Our interest is both from the side of, OK, let’s make something useful that can be given to people,” said Carl Davis, a research associate at the Emory Vaccine Center. “Also, let’s understand what happens early on in a viral infection so we can try to trigger the response so we can get longer lasting vaccines.”

Davis said their studies are mostly in animal trials now.

Still, why keep putting all this effort into developing new Ebola vaccines if there was one that seemed to work well, the one being developed by drug company Merck?

One reason: That vaccine is specific to Ebola Zaire, the strand that caused the outbreak. There are others, like Ebola Reston and Ebola Sudan. There’s also Marburg, a virus similar to Ebola.

If one of those causes the next outbreak, doctors would likely need a different vaccine to help stop it.