Prepare yourselves, pet owners: The era of the doggie activity tracker has arrived.

It’s easy to see why the tech industry would want to get in on pet gear. We spend nearly $60 billion a year on our pets, according to the American Pet Products Association, and the pet-tech segment is really just getting started. There are gadgets like WiFi-connected cameras that let you remotely monitor your pet while you’re away and robotic puzzles. And there is a growing number of  wearable trackers, including FitBark, Tagg and Whistle. Some  just record activity; others track location with built-in GPS devices. They range in price from around $50 to $80.

Davide Rossi is the CEO of FitBark, which makes a small, bone-shaped tracker that attaches to your dog’s collar and records how much sleep, awake time and play time a pet gets throughout the day.

Rossi, an Italian mechanical engineer and former investment banker, said some 45 percent of households own a dog, but most of us don’t take their fitness seriously.

“We’re here to tell the world that an active lifestyle isn’t one bit less important for dogs than it is for humans,” he said. “The problem is really recognizing that with our dogs, because they’re just so damn cute! Unlike with humans, dogs that are in terrible shape and really bad health, they still look adorable to us.”

Peter Harrop is the chairman of IDTechEx, a market research firm that predicts animal wearables will be a $2.6 billion market by 2019.

That figure covers all animal wearables, including those that track livestock, monitor race horse health and give data on roaming wild animals like wolves and birds. But Harrop said pet activity trackers could get a piece of that market.

“Often, it’s the big people doing wearable technology for humans, Apple, Google and so on,” he said. “Whereas for animals it’s more nichey. It gives opportunities for medium and small companies to participate, and that’s what they’re doing.”

If activity trackers can help detect health issues or keep dogs from becoming too sedentary, Harrop argued that’s a benefit.

“It’s probably going to be possible to maintain their lives for 50 percent more time. What’s wrong in that if it’s a healthy life that they enjoy? There are good things still to come that will create new markets,” he said.”I had three cats, and one would spend quite a lot of money to know where your cat went at night!”

So, as a brand new puppy parent myself, I thought, why not give it a shot?

I asked FitBark to send me a loaner device, and I outfitted my new dog, Reggie, with it. I downloaded the companion app and set it up just as I would a FitBit (in fact, you can even integrate the FitBark with the FitBit and compare your activity to, um, your dog’s). The device connects to the phone via Bluetooth and reports its results to the app whenever you open it up.

Overall, I found the experience intriguing. Since I’m a new dog owner and was just learning the habits of my pup, plus worrying that I might be failing as a dog mom, it was actually kind of helpful to see his stats arrayed each day and hour by hour. I could reassure myself that he was getting enough exercise and figure out that, yes, it seems pretty standard for him to snooze all day.

The FitBark app is attractive and easy to use, although it doesn’t seem to have much usage in my area — I couldn’t find any other dogs to compare to in the app’s social feature.

My primary complaint is that the FitBark has to be charged with a mini USB cable, and the battery only lasts about a week. That’s a complaint with human wearables, too. But it seems like a gadget like this should just come with something like a watch battery that lasts months or more.

And as it turned out, by the time the battery died, I had basically figured out Reggie’s routine and didn’t feel a pressing need to recharge it and keep gathering data. That’s also a problem with human wearables, which tend to have a somewhat high abandonment rate.

And trying to create a category for pets that is floundering a bit for humans could be problematic: FitBit’s stock has bottomed out recently as new devices fail to impress and competition from smart watches grows. Jawbone, maker of the once-popular Up bands, had layoffs late last year (its second round) and its future looks uncertain as its fitness trackers fail to find much of a market.

When I asked dog owners at a local park in Northern California about dog fitness trackers, no one I talked to had ever heard of the devices. A couple of people were profoundly skeptical, but I was surprised at how many immediately saw some value. Several people mentioned their overweight dogs and said it would be nice to track their activity for weight loss purposes. One man said he would love to have a GPS tracker for his blind dog, who can’t always find its way home.

And one enthusiastic FitBit wearer said she would happily buy trackers for all eight of her chihuahuas, assuming the price was right — about $10 to $15 each. So maybe if the prices come down, there will be quantified canine fans after all. 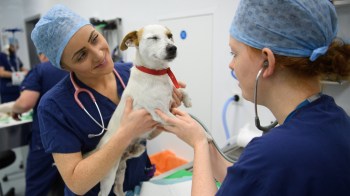