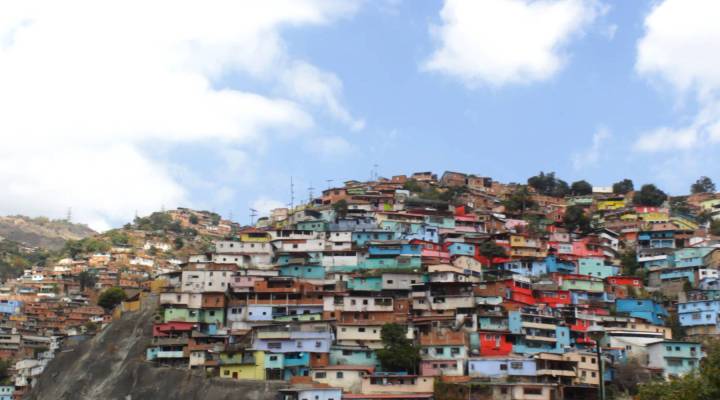 The higher you climb in Venezuela's barrios, the poorer the people are who live there. Jorge Galindo/Marketplace
The Resource Curse

The higher you climb in Venezuela's barrios, the poorer the people are who live there. Jorge Galindo/Marketplace

No one told me Caracas meant stairs. Yes, figuratively. If you want to see one of the capital city’s many slums, or barrios, the only way to really get in and see anything is to walk up and down. Barrios are built into the city’s hills, away from the shops and jobs. The higher up you live, the poorer you are.

“That’s how it is in the west side, the poor side,” my translator and fixer, Yesman Utrer, told me. “It’s the opposite on the east side, where the richer like to live high up.”

The steps of a barrio in Venezuela lead away from the shops and jobs below.

We are visiting Yesman’s barrio. Like most, it is a stronghold for the ruling United Socialist Party, the party of the late president, Hugo Chavez. Unabashedly leftist and anti-American (and, Yesman said, charismatic), Chavez held power from 1998 until his death in 2013. By all accounts, he changed Venezuelan politics forever. His hand-picked successor, Nicolas Maduro, now holds the presidency, but his approval rating — like the current economy — is in the toilet. “He is a terrible speaker,” Yesman said.

Which may be why images of Chavez populate every barrio. The most obvious are the wall paintings and graffiti.

But his economic signature is just as important, perhaps even more. Yesman pointed to the many red-colored metal roofs that dot the hillside.

“The government gave those to the people.”

As he tells the story, residents who supported Chavez received in return new red roofs and white windows. And refrigerators. Here’s the generous version of the story: These were the country’s forgotten people that Chavez remembered. They are the loyal supporters of the Socialist Party to this day. If you’re not poor, you probably don’t get it.

In one version of the story, residents who supported Chavez received new red metal roofs and white windows.

The less charitable view: Chavez used Venezuela’s petro-dollars to buy their support. He tapped into their greed, and their neighbors’ envy: If you saw the family next door getting something nice, you could campaign for Chavez too and find yourself on the Roof and Window Distribution List.

At the bottom of the hill, lines come into view. It is impossible to miss some 40, 50 people queuing up to shop at a government store run by the state oil company Petroleos de Venezuela S.A.  (PDVSA). Yesman explained his country never saw these lines until two or three years ago.

“They began with the scarcity.”

Venezuela, as you may have read, finds itself short on just about everything: milk, cornmeal, bread, meat, diapers, toilet paper, condoms. Birth control pills apparently are nowhere to be found. The explanation has something to do with the nature of Venezuela’s economy: It imports just about everything, and it exports one thing: oil. And when the selling price of the only thing you sell falls by two-thirds, you hardly have any money to buy imports.

My fixer is not immune to any of this. At 28, Yesman is the father of a four-month-old baby girl (crazy cute). Before I flew down, he asked me to bring him a sack of diapers from America. There are no good options down here: either line up all day and hope the shelves are stocked – they’re often bare – or go to the underground black market and pay 10, 20 or 40 times the official price. There appears to be no good solutions in the barrio, except to resort to gallows humor, something Yesman possesses in abundance.

“We have a word, bucear,” he explained. It translates literally as “to scuba dive” but in slang form it means to ogle, to leer. “Before we used to bucear beautiful women. Now we bucear their bags, to see if they have any cornmeal or perhaps milk.”