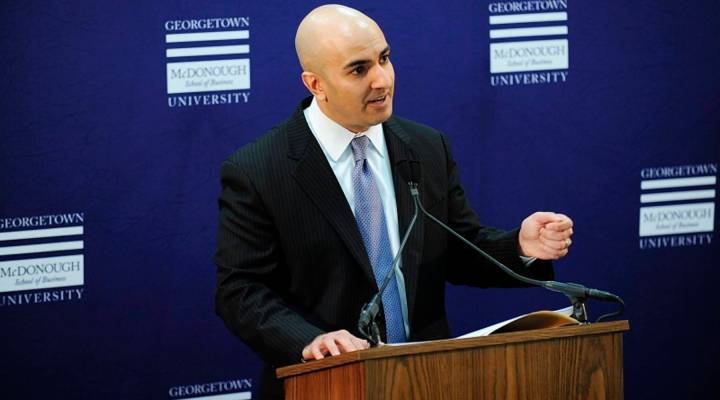 The new head of the Federal Reserve Bank of Minneapolis is taking aim at big banks.

Neel Kashkari is a former top U.S. Treasury official who ran the $700 billion Troubled Asset Relief Program, which helped stabilize banks in the financial crisis. Now, in his new role as Minneapolis Fed president, he said there’s still a risk that if big banks fail, the economy could tank. In a speech this week, he said he wants regulators to do more to avert such an outcome.

Kashkari took the helm of the Minneapolis Fed in January, where officials had sounded alarms about the risks of banks that were “too big to fail” several years before the financial crisis. He found regulators there were still concerned.

“Some of them said, ‘We think ‘too big to fail’ is still an issue,’” Kashkari said in an interview Wednesday. “And I already had that view.”

Kashkari said post-financial crisis reforms have left banks in better shape, especially in terms of the financial cushion they’re now required to keep. But he said some banks remain so big — and interconnected — that one failure could still have a domino effect. Regulators have the authority under the Dodd-Frank Act to wind down a troubled bank with an insufficient bankruptcy plan, but Kashkari said that doesn’t go far enough.

“My concern is that if there is a stressed economic environment with broader weaknesses, if regulators let that one bank fail, that could trigger contagion to other banks,” he said.

Some in the banking community said Kashkari is rehashing matters that have already been resolved.

Fratto, who used to work with Kashkari at the Treasury Department, said some of the reforms Kashkari may consider, such as regulating banks as utilities, could further restrict bank activities, like trading, to an extreme degree. Dodd-Frank has already put limits on banks’ risky business practices.

“They just want to eliminate anything that doesn’t have to do with plain vanilla-style banking,” he said.

And forcing banks to slim down their operations could also thin out the pool of available capital, according to Guggenheim Securities senior policy analyst Jaret Seiberg. He said investors might be less willing to provide the capital needed to make the financial system work, which would ripple through the economy.

“The biggest banks tend to serve the largest corporations, which are major employers, who use bank credit to finance trade, to finance the purchase of capital equipment and to build new plants,” he said. “And it’s not that this credit won’t be available elsewhere, it’s just a question of whether it will be more expensive or harder to get.”

But Kashkari said such economic trade-offs are worth considering, given the potential costs of another financial crisis. And he said other banks could step up.

“We have a lot of small and midsized banks in America,” he said. “And they could grow, and I think they would love to make some of those loans.”