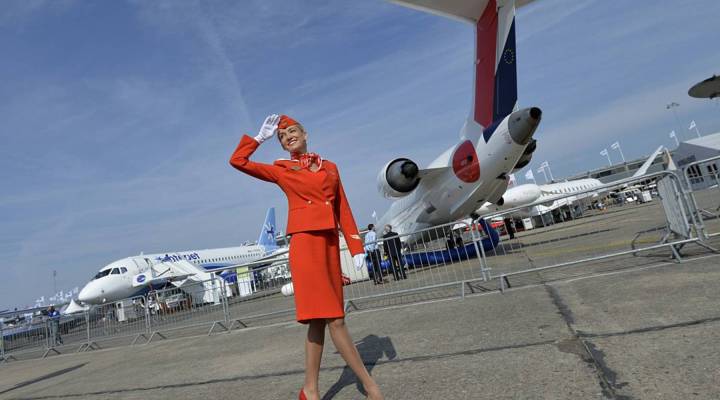 COPY
A member of Cabin crew of the Russian airline Aeroflot salutes to visitors during the International Paris Airshow at Le Bourget. The company is one of several that could potentially be sold. MIGUEL MEDINA/AFP/Getty Images

A member of Cabin crew of the Russian airline Aeroflot salutes to visitors during the International Paris Airshow at Le Bourget. The company is one of several that could potentially be sold. MIGUEL MEDINA/AFP/Getty Images
Listen Now

The Kremlin says it’s planning to raise more than $12 billion selling off state-owned assets. The money would be used to plug the hole in the Russian government’s budget caused by the collapse in oil prices .

As many as seven major corporations could be up for sale, including the airline Aeroflot, the oil giant Rosneft, the diamond miner Alrosa and Russian Railways.

Opinions vary about the merits of the proposed sale and whether it offers foreign investors a unique opportunity to snap up valuable Russian property.

“These privatisations make perfect sense,” said Alexander Branis of London-based fund manager Prosperity Capital. “The Kremlin wants to repair the government’s finances. Any government would do the same. We may take a look at this when the details are published. We’re still very happy investing in Russia.”

But Brenda Kelly of the London Capital Group describes the planned sale as “desperate and risky.” The hazards of putting money into Russia are well documented: corruption, poor corporate governance, and a somewhat shakey application of the rule of law are among the pitfalls.

Nick Redman of the International Institute for Strategic Studies in London doubts whether the privatisations will — in the end — amount to much.

“I would be surprised if there was a large scale disposal of companies. You might see one or two at the most,” Redman said.

He believes that only minority stakes will be for sale. Putin has spent so much time and effort tightening his grip on the state, he is unlikely to surrender a big swathe of the state’s strategic assets.