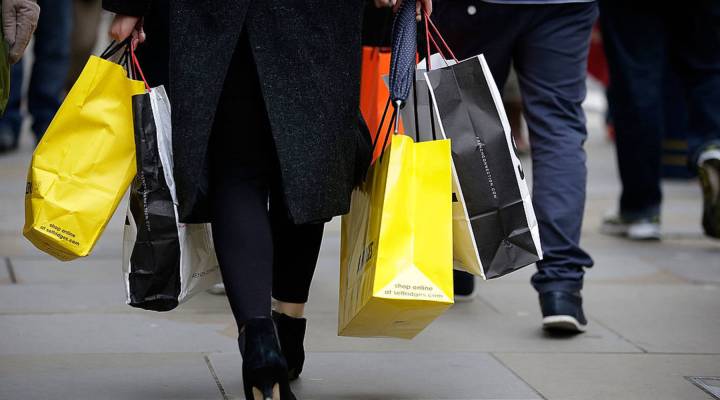 Americans spent a bit more freely in January than the month before, say figures out this morning from the Commerce Department. Retail sales were up two tenths of a percent —better than analysts expected — driven by spending on cars, clothing and online merchandise.

“They weren’t bad, but they weren’t outstanding either,” he said, pointing out that analyst expectations were low because the economy has been growing slowly.

Hill said lower oil prices should boost retail, but “there’s no way to disentangle the negative effect of slow overall growth and uncertainty from the positive effect of the fact that consumers have more money in their pockets from lower energy costs.”

That money in their pockets was money people weren’t willing to spend last year, leading to feeble holiday sales.

“The challenge that consumers have is believing that the gas price reduction will stick around for a while,” said Dennis Hoffman, who teaches at the W.P. Carey School of Business at Arizona State University. “They don’t want to make major consumer durable purchases based on a short-term downward spike on gas prices.”

But a boost in retail sales won’t be enough to convince the Federal Reserve the economy is firmly back on track. Policymakers will be looking at several more data dumps scheduled between now and the next Federal Open Market Committee meeting in March.

“So what are they going to be watching,” Hoffman said, “is primarily labor market pressures, price pressures, another round of retail sales data, another employment report, and they’re going to be looking at those closely.”

Peter Conti-Brown, a Fed expert at the University of Pennsylvania’s Wharton School, said it will take something major to divert the Fed from its current strategy of incremental increases to the interest rate. But we don’t know what those increments are just yet.

“So have we seen all the increasing that we are going to see in 2016 — which is none?” he said. “That Yellen did not say because I suspect Yellen does not know.”