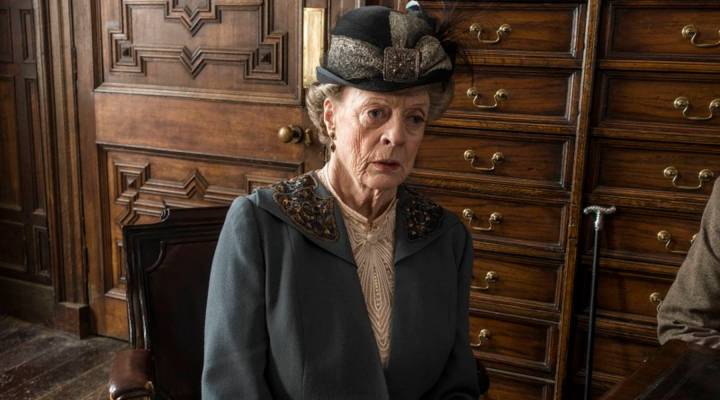 COPY
Health policy wonks may not all agree with Maggie Smith's Dowager Countess of Grantham on Downton Abbey when it comes to hospital policy, but they're fans of her character and this season's plotline.  Courtesy of Nick Briggs/Carnival Film & Television Limited 2015 for MASTERPIECE

Health policy wonks may not all agree with Maggie Smith's Dowager Countess of Grantham on Downton Abbey when it comes to hospital policy, but they're fans of her character and this season's plotline.  Courtesy of Nick Briggs/Carnival Film & Television Limited 2015 for MASTERPIECE
Listen Now

This season, Downton Abbey’s plot line has health wonks on the edge of their seats: a heated debate about hospital consolidation that closely parallels what’s going on in the U.S. health care system today.

If you’re not a Downton fan (and even if you are), here’s a quick plot recap: It’s 1925 for the lords and ladies at Downton Abbey– think flapper dresses, cocktail parties and women’s rights. A big hospital in the nearby city of York is making a play to take over the Downton Cottage Hospital next to the posh estate.

Or as Maggie Smith’s character, the Dowager Countess of Grantham, sees it, “The Royal Yorkshire county hospital wants to take over our little hospital, which is outrageous!”

The battle lines have been drawn between the Dowager Countess, who wants the hospital to stay a small community endeavor, and the rest of the family, who hope the merger will turn the dinky open-ward affair into a first-rate modern medical institution.

Health care historian Howard Markel, who runs the Center for the History of Medicine at the University of Michigan, said the conceit is actually fairly accurate.

“The 1920’s really begins the golden age of medicine,” he explained. Before then, hospitals didn’t have much to offer in the way of treatment.

“They were really based on old time 19th century medicine, and what that entails is basically nursing. You feed people, you make them comfortable,” he said.

There weren’t many medications available — antibiotics, insulin or even intravenous fluids.

But in the early 20th century, all sorts of new medical technologies came onto the scene — new ways to peer into the body, new medications and pathogen-free surgeries.

To provide modern care, “you need X-ray machines of all kinds, you need a chemistry laboratory and you need special operating rooms,” said Markel, all of which cost much more than the gauze and broth of the past.

Cities started to build bigger, grander hospitals, which in turn started to absorb the smaller, old-fashioned hospitals in the surrounding towns and villages. Those mergers did have some benefits for local populations.

“If we form such a partnership, our patients would have more access to more modern equipment, to more advanced treatments,” Downton Abbey’s Lord Merton noted on the show.

Many of his real-life contemporaries agreed, making the golden age of medicine a heyday for hospital consolidation on both sides of the pond.

Nowadays,  we appear to be in another Downton-like consolidation surge here in the U.S., said Kathy McDonald, who directs the Stanford University Center for Health Policy.

“It’s been since about 2010 that there’s been sort of an uptick in terms of consolidations,” said McDonald. About 100 mergers and acquisitions occur each year right now, about twice as many as there were before 2010, she said.

But this time around, it’s not about technology — it’s about finances. Hospitals need to be part of larger networks to flex their muscles in negotiations for profitable contracts with insurers. And thanks to the Affordable Care Act, they are now often paid based on the quality and efficiency of the care they provide, rather than for each test or procedure.  Actually tracking how good their quality is turns out to be very expensive.  And it can be more economical to team up to manage care and track quality.

“They might be providing perfectly good quality, but if they can’t prove it, then they’re not going to get paid as well,” said McDonald.

Those mergers can have real consequences for communities, which may see a local hospital transform or even disappear entirely.

“Just like on Downton Abbey, the local hospital is a resource that people care about. They employ people in a community and they take care of people,” said McDonald. So the debates continue, now as then.

And true to form, the indomitable Dowager Countess tells us exactly what she thinks about all this so-called progress: “For years, I’ve watched governments take control of our lives and their argument is always the same: fewer costs, greater efficiency. But the result is the same too. Less control by the people, more control by the state.”

So whose side are the experts on in this Downton debate?

“Personally I love Maggie Smith and have loved her since i was a young boy, so I’m on her side as a fan,” said Markel.

But, he adds, the other side is probably right.

McDonald is also on the side of progress. But even for health care policy experts, it’s hard to argue against the Dowager Countess.

There are plenty of Downton fans who say the whole hospital plot line is kind of a snoozer. Maybe it’s no surprise — the wonks love it.

“Healthcare just matters to people, so even though we might not be paying attention to this plot line, we probably should,” said McDonald.

And with an audience of nearly 10 million viewers for the season premiere, there’s a good chance at least a few people are.