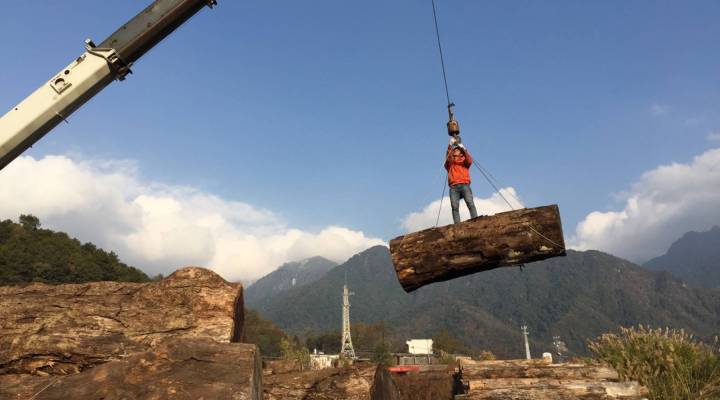 COPY
Workers in Pianma, China load logs from old growth forests in Burma onto trucks that will take the merchandise to Eastern China, where they'll be cut into furniture. Half a billion dollars' worth of timber have come across Burma's border into China. Rob Schmitz/Marketplace

Workers in Pianma, China load logs from old growth forests in Burma onto trucks that will take the merchandise to Eastern China, where they'll be cut into furniture. Half a billion dollars' worth of timber have come across Burma's border into China. Rob Schmitz/Marketplace
Listen Now

The streets of Pianma are lined with sawmills. They’re also lined with logs as big as cars: Teak, Rosewood, and Golden Camphor — all of them felled illegally across the border in Burma from old growth forests and brought to the Chinese side to be cut down into furniture.

“These trees were several hundred years old,” said Li Xiaomei, showing off a two-story stack of logs outside the mill she owns with her husband, Li Jianli.

Logs from old growth forests across the border in Burma line the streets of Pianma, on the Chinese side of the border. (Rob Schmitz/Marketplace)

Business is good. Demand from China’s growing middle class is strong, and that’s why across the border inside Burma, Chinese crews cut down swaths of forest twice the size of New York City each year. The logging across the border is illegal – Burma has banned the export of timber to protect its old-growth forests. But across the border lies the Burmese state of Kachin, where an ongoing civil war between the Burmese military and several local militias has made the ban nearly impossible to enforce. Furniture maker Li Jianli says the chaos makes it easier for Chinese companies to log.

“They’re very poor over there, and local militia bosses will sign contracts to cut a mountainside,” said Li, who insists the operations are legal. “Our Chinese companies build roads, bridges and schools for their people, and in return, they sell us timber.”

According to the Environmental Investigation Agency, an international NGO, by 2013 more than half a billion dollars’ worth of timber had come across this border.

“The problem is that China is a hungry nation in terms of timber,” said the agency’s Julian Newman, who has visited the area and written reports on the cross-border timber trade. “It’s got a deficit between its local production, what it needs, and it looks to many countries including Myanmar to get its raw material from.”

Newman suspects China’s government plays a part in this illegal trade, too.

“We are talking about almost a million cubic meters of wood coming across the border per year of logs which are illegal under Myanmar law,” Newman said. “That’s not something you can hide easily. Therefore, there’s some complicity at the border.”

At the border crossing in Pianma, a Chinese guard armed with a machine gun ordered me to delete pictures I just took of the border. It’s a sensitive place. Apart from illegal timber, drugs make their way across this border — there’s a marijuana plant growing wild in the middle of Pianma’s vegetable market — and there’s a war going on just miles beyond the crossing. But traffic from Burma has been slow recently. A year ago, the Burmese army arrested 155 Chinese loggers, sentencing them to life in prison. They were eventually pardoned when China’s government agreed to halt the import of Burmese timber.

The ban’s only been in effect a few months, but it’s had a noticeable impact on Pianma’s economy. “Before there were more than 300 sawmills here,” said furniture maker Yang Xili, “Now there are fewer than 30. There used to be at least 60,000 people in this little town. Now you can’t even find 6,000.”

Yang said his salary of $5,000 a month has been cut in half, and he’s sculpting the last of his timber reserves into tables, chairs, and desks. But there’s hope for this beleaguered economy.

“We’ve been told the government will lift the ban in March,” he said with a smile.

Half of Burma is covered by natural forest. It’s projected that by 2030,115,000 square miles, an area the size of Arizona, will be cut down. And in this Chinese border town, loggers eagerly wait to do just that.