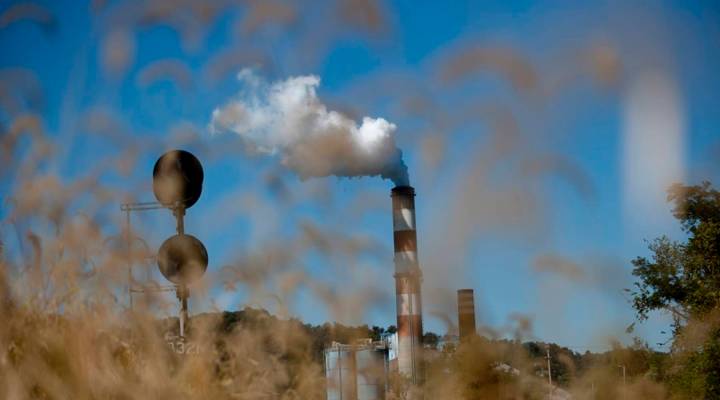 COPY
A plume of exhaust rises from a coal-fired power station in Pennsylvania. The Supreme Court put a hold on rules to cut emissions. Photo by Jeff Swensen/Getty Images

A plume of exhaust rises from a coal-fired power station in Pennsylvania. The Supreme Court put a hold on rules to cut emissions. Photo by Jeff Swensen/Getty Images
Listen Now

The U.S. Supreme Court halted the Environmental Protection Agency’s regulation on coal — part of the Clean Power Plan — in a 5-2 decision Tuesday. Marketplace host Kai Ryssdal talked to Scott Tong, Marketplace’s sustainability correspondent, about what the halt on coal regulations means for energy in the long run.

This Supreme Court decision means that the pause button has been pushed on the EPA rule to require power plants to cut emissions, Tong said. The Supreme Court rarely issues these types of stays on regulations. The justices did not explicitly say why they made this decision, but their challenge was to assess if the rule on the EPA has a “reasonable likelihood of success” on merits.

Tong said the coal industry plays a massive role in the larger U.S. economy; it is foundational to our electricity system and way of living. But he said there is already the trend of pushing coal out of the utility system in favor of natural gas from fracking.

Now the challenge is to modernize and clean up the power system, Tong said, while also keeping everything on. Most likely this decision will rest on the next U.S. president and his or her decision about how hard to push on this issue.

The U.S. has set a standard for EPA regulations, and this could impact the way the rest of the world responds, Tong said.