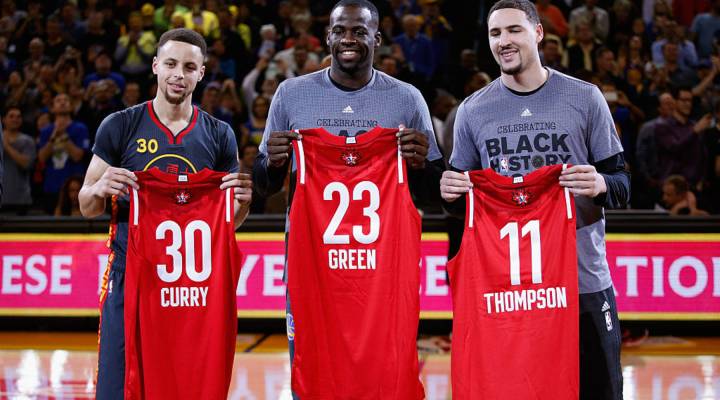 COPY
(L-R) Stephen Curry #30, Draymond Green #23 and Klay Thompson #11 of the Golden State Warriors hold up their respective All-Star jerseys before their game against the Houston Rockets at ORACLE Arena on February 9, 2016 in Oakland, California. Ezra Shaw/Getty Images

(L-R) Stephen Curry #30, Draymond Green #23 and Klay Thompson #11 of the Golden State Warriors hold up their respective All-Star jerseys before their game against the Houston Rockets at ORACLE Arena on February 9, 2016 in Oakland, California. Ezra Shaw/Getty Images
Listen Now

In San Francisco, fans watching the Golden State Warriors at a local bar have a lot to cheer for. A recent championship. The league’s best record. And for the first time in 40 years, three players in the all-star game.

But, it’s a game that’s in another country.

For the first time, the NBA will have its all-star game outside of the United States. This Sunday the game will be hosted in Toronto.

So, why Toronto? Well, sports economist David Berri is one of many who have a different question: how come the NBA hasn’t already hosted the all-star game in Canada?

“It’s interesting that it took them a while to do this,” he said. Berri is a professor at Southern Utah University.

He thinks going to Toronto is a great piece of  marketing for the NBA. “Toronto is the best way they can demonstrate to the world that it’s a global game,” Berri said, “because it’s the only team that’s not in the US.”

Toronto has media appeal to boot. It’s team, The Raptors, are good this year, and pop-star Drake is their ambassador, so he’ll be around. Although, the half-time show will star another celebrity: Sting.

Now, it’s a chance to appeal to foreign markets, he said, like Canada, which is happy to have the game.

David Magley runs the National Basketball League of Canada. “I think it’s huge for the entire country of Canada,” he said. In this country, he said, the game is bigger than you might think. “There are more NBA players from Canada than any country outside of the U.S.” You can see a little breakdown of the foreign talent in the NBA here.

Need one more reason for Toronto? Well, what the NBA considers its first game ever was played there. You can check out what that game looked like in this old newsreel:

Unlike back then, many curious fans on Sunday will be watching from afar, on the TVs and in the bars of a foreign country called the United States.