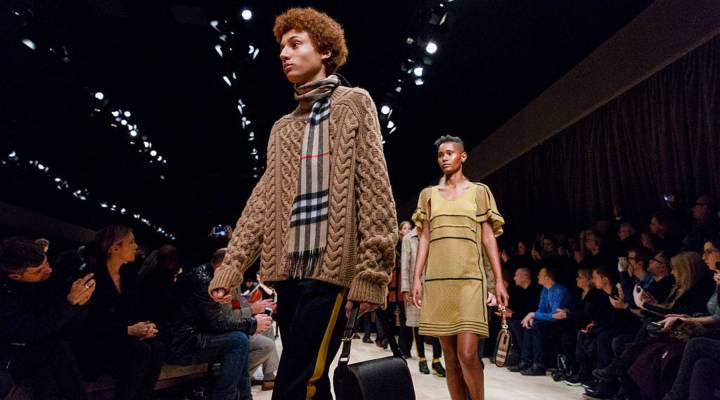 Models walk the runway at the Burberry show during men's fashion week in London on January 11, 2016. Tristan Fewings/Getty Images

Models walk the runway at the Burberry show during men's fashion week in London on January 11, 2016. Tristan Fewings/Getty Images

The suit claims J.C. Penney used the design on jackets, scarves and bags. A quick search of its online store turned up this scarf, which bears at least a passing resemblance to the “classic” Burberry scarf, which is available in many colors and styles. Burberry said it’s held the trademark to the pattern,  in any color, for decades.

images via JCPenney and Burberry

The plaid pattern has a strange history, and this is hardly the first time Burberry has tried to clamp down on its use. The company had scrubbed it from its own clothes when it was struggling in the mid-2000s.

The company had an image crisis around the turn of the century, when its plaid pattern became associated with “chavs” — British slang for working-class young people who dress in tacky designer clothes and get into fights at clubs and soccer games. The Economist reported that bouncers wouldn’t let people wearing the pattern into bars.

Former Burberry head Angela Ahrendts told the Guardian she spent years downplaying the pattern while buying back other companies’ licenses to use it. The brand refresh coincided with a big expansion in North America and rising sales in Asia. Luckily the lower-class association hadn’t spread overseas — in the U.K. David Beckham is “king of the chavs,” in the U.S. he’s the face of H&M.

The company got its image back and Ahrendts moved on to Apple, where she heads up retail. This latest move against alleged copycats comes as Burberry is in the middle of another revamp: this time it’s changing up runway shows and production time to keep pace with fast fashion.

Correction: A previous version of this story misspelled David Beckham’s name. The text has been updated.