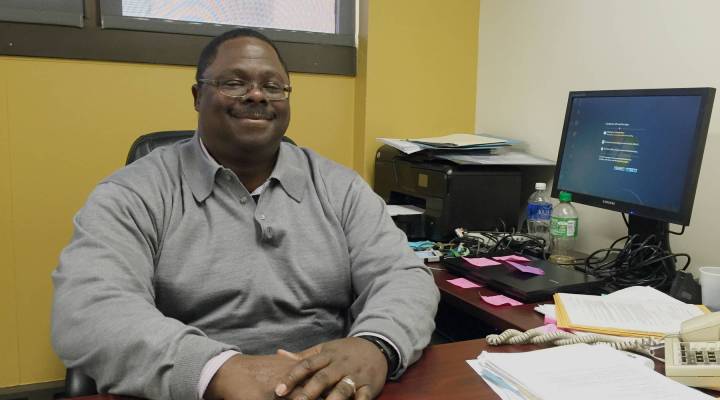 COPY
Tyson King-Meadows is chair of the Africana Studies department at the University of Maryland, Baltimore County, which is taking new steps to increase faculty diversity. Amy Scott/Marketplace

Tyson King-Meadows is chair of the Africana Studies department at the University of Maryland, Baltimore County, which is taking new steps to increase faculty diversity. Amy Scott/Marketplace
Listen Now

Tyson King-Meadows loves a good sports metaphor. He’s chair of the Africana Studies department at the University of Maryland, Baltimore County. On a recent afternoon he used Michael Jordan and the 1984 NBA draft to make a point.

“What number was Michael Jordan drafted?” he asked the room. “Just guess.”

“Do we know who number one and number two were?” King-Meadows said. “That’s the point. He was passed over. He went third. He will go down as one of the greatest basketball players of all time.”

This was not King-Meadows’ usual audience of undergrads at UMBC, a public research university outside Baltimore. He was talking to fellow UMBC professors, in psychology, medieval history and computer science. They’re part of a special committee working to make the recruiting and hiring process more open and fair.

Jordan was passed over, King-Meadows explained, partly because “people had expectations that a taller player would be a better basketball player.”

“My point is,” he said, “sometimes you have to look at the whole person.”

King-Meadows, a guest speaker at this meeting, was the only African American in the room. The members of the committee are all white – and not by accident.

“We understand here at UMBC that the burden of inclusiveness should not rest on minority faculty,” King-Meadows said later in his office.

Too often, it does. That sometimes “invisible service” — sitting on committees and mentoring students of color — can come at the expense of research and ultimately delay a minority professor’s promotion and tenure.

But there’s another important reason for white faculty to advocate for diversity and call out bias, said medievalist Susan McDonough.

“The burden has to be more on the majority culture to do it more than we do it,” she said. “I’ve seen it in my classrooms that, when students of color point out bias, there’s often a willingness to dismiss it that would not have been there if it had been a majority person who had shared that thought.”

UMBC is actually known as one of the most diverse research universities in the country. About half of its nearly 14,000 students are non-white. Sixteen percent are black, as is the university’s longtime president Freeman Hrabowski. He chairs President Obama’s Advisory Commission on Educational Excellence for African Americans.

“Many people know us because we’ve had considerable success in educating students of all races in science and engineering,” Hrabowski said. “Our graduation and retention rates for African Americans and other students of color are as high as they are for any other group.”

So it’s all the more surprising that among the faculty, just seven percent are black.

“We’re slightly ahead of the national average,” Provost Phil Rous said, “but I would be the first to say that we’re not where we want to be, and this is probably the highest strategic priority I have as provost.”

In the student protests that have swept college campuses around the country in the past year, one of the big complaints is a lack of diversity in the faculty. Nationally, just four percent of full-time professors are black. About three percent are Hispanic. Universities trying to increase diversity are drawing from a relatively small pool. Only about six percent of PhDs in 2013 were awarded to African Americans. But that’s only part of the story, Rous said.

“Saying there’s not enough people with PhDs isn’t really a great excuse, because even though the percentage may be small, there’s still a lot of people out there,” he said.

Which brings us back to that committee of professors. It’s modeled after a similar group at the University of Michigan. One of the UMBC members is Christopher Murphy, chair of the psychology department. Part of the group’s job, he said, will be to train fellow professors to recognize the unconscious biases that can creep into the faculty search process and unfairly weed out perfectly qualified candidates.

Murphy has been through this kind of training himself. Let’s say someone applying for a psychology job has published research on urban minority groups, he said.

“Other people might see that as kind of an advocacy rather than a scholarly approach,” he said. In his field such research is sometimes known as “mesearch,” he said, “so people kind of downgrade people who might be studying things that have a personal relevance to them.”

When people are under time pressure to make a decision, Murphy said, they’re even more likely to fall back on first impressions and gut instincts. In some searches, a department will get 500 applications.

Murphy and his fellow committee members will also work with professors to rethink how they recruit. Just posting a job ad in the usual spots and waiting for CVs to roll in is no longer enough. Every open position – there were 29 tenured or tenure-track hires last year — must include a diversity plan, outlining specific steps for reaching underrepresented minorities.

Even when there is no job opening, professors should be out there looking for young minority scholars on their way up, King-Meadows said.

“Talented minority faculty are not unicorns,” he said. “It just depends on where you’re looking.”