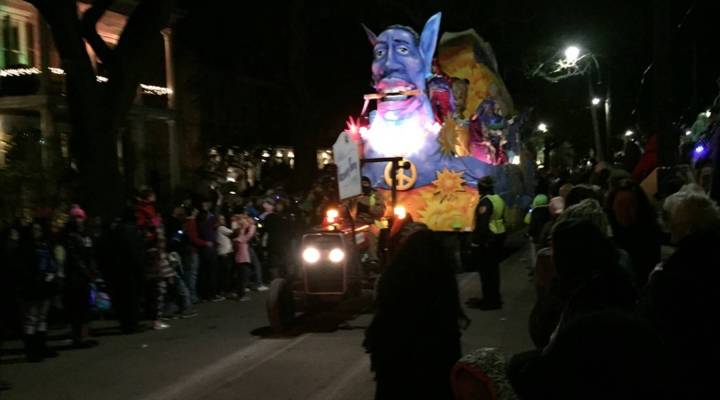 Mardi Gras draws about a million visitors to New Orleans each year. That’s more than double the city’s population. Few spectacles rival the major St. Charles Avenue parades, with crowd lining the streets for miles on each side. It’s all dancing to marching bands and screaming at the floats for trinkets if you’re a spectator.

But picture Mardi Gras from a police point of view: The crush of people. The drinking. Masks mean anyone can roam unrecognized. Violence sometimes erupts. It’s a tough beat.

New Orleans resident Ariane Mitchell keeps a close eye on her two young kids, as they dash back and forth from floats, and show her the light-up beads and teddy bears they caught. Given the city’s high rates of violent crime year-round, she says her family might be safer on the parade route than at home.

“All the attention is drawn right to the parades,” Mitchell said. “So that means whatever goes on on the outskirts of the parade, there is nobody to take care of that.”

How much should New Orleans police focus on protecting tourists, while neighborhoods suffer? It’s a big question right now. New Orleans is short hundreds of police officers after years of budget constraints. The New Orleans Police Department is on a mission to recruit and train more. But while it grows its ranks, a new private sector fund of $5 million will help pay for extra security in the tourist district.

New Orleans Police Chief Michael Harrison praises the program. “That partnership allows me to make sure we have adequate staffing in every part of the city,” Harrison said. “It allows us to have high visibility, increased citizen satisfaction.”

Louisiana State Police have always helped during Mardi Gras. This year, 50 to 100 state troopers will stay on in New Orleans indefinitely.

The FBI also has more eyes and ears on Mardi Gras, and Special Agent in Charge Jeffrey Sallet said their work includes monitoring social media for any threats, in addition to more surveillance camera coverage and SWAT teams. It’s all “to make sure we are prepared to keep people safe if something bad does happen,” he said.

Sallet was in Boston when the marathon bombings happened. Like the Boston Marathon, he said Mardi Gras is a local celebration that also draws visitors from all over. He is careful to note there are no immediate threats, but said it’s worth devoting extra federal resources to monitor the city-wide party.