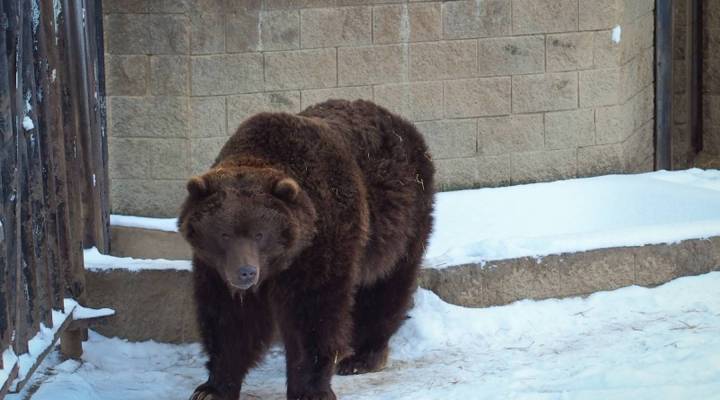 COPY
At the Alaska Zoo, a behind-the-scenes tour is part of a special program called "Keeper for a Day." Zachariah Hughes

At the Alaska Zoo, a behind-the-scenes tour is part of a special program called "Keeper for a Day." Zachariah Hughes
Listen Now

Ever wanted to feed a snow leopard? What about a moose, or a pack of wolves? This year you can, for a tidy sum.

It’s part of a package deal at the Alaska Zoo, just one piece in a strategy particular to non-profits in the high north: Finding ways to bring in a little extra cash during the long, lean winter months ahead of tourist season.

Zookeeper Timothy Lescher split a side of caribou ribs with a hand-saw on a recent afternoon. “I think we got probably nine pieces here, which is a good number,” Lescher said, stuffing assorted carcass chunks into a black plastic trash-bag. He was getting ready to toss piece after piece over a nearby fence to a hungry pack of wolves.

“Looks delicious, doesn’t it?” Lescher said, as the wolves whined and paced.

“Is that moose scapula?” I asked.

Lescher was showing off a behind-the-scenes tour of the zoo that is part of a special program called “Keeper for a Day.” For $200 per person, you shadow zookeepers for five hours, getting up close with everything from wolves to yaks.

It is just one of the zoo’s eclectic hodgepodge of revenue streams.

Jill Myer directs development at the zoo, and ran down expenses line by line in her office, which overlooks a goat pen. “$125,000 a year–that’s basically just to care for the animals,” Myer explained.

Fewer human visitors wander the chilly grounds of the zoo in the winter months, to see animals like this reindeer.

The biggest overhead costs are paying for the keepers and other staff. According to Myer, there are a couple of factors that make funding a sub-arctic zoo a little usual. Most of the zoo’s  revenue last fiscal year came from admissions during the summer months, when tour buses and cruise ships unleash a steady torrent of visitors eager to glimpse polar bears and snow leopards. The zoo even extends its hours until 9 p.m.

“It’s Alaska,” Myer said. “You can come to the zoo in the middle of the night and there’s animals still up and roaming around because there’s light.”

But the winter is when the zoo’s cold-weather creatures tend to be a lot more out and about. They are not the only ones. The keepers have extra time, too: Bears are hibernating, the hours are reduced, and there are fewer visitors wandering the chilly grounds.

Leveraging staff to get more enthusiastic patrons spending on cool experiences isn’t unique to the zoo. Ann Hale oversees development at the Anchorage Museum, and has more than two decades of experience funding non-profits across Alaska.

“Because the economy here is reliant on summer tourism,” Hale said in her office, “it may be more unique for us than it is in other states or other communities.”

According to Hale, non-profits in the 49th state plan accordingly for the off-season, which in Alaska, runs from September through mid-May.