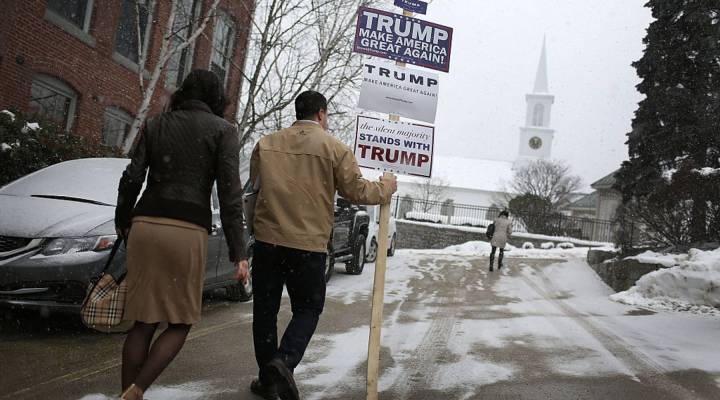 If you’re running for president and you’re looking at your war chest, you have to make constant decisions about how to divvy up your time and your money.

You can focus on rallies or expensive TV ads — $15 million dollars was spent at one local New Hampshire TV station in just the past 10 weeks.

But research shows the real bang for your buck comes from the ground game: “phone calls, organized door knocking, volunteer recruitment, driving people to the polls on election day who need it, that sort of thing,” explained Joshua Darr, assistant professor of political communication at Louisiana State University. “It takes $670,000 dollars in ad buys in a general election to get the same number of estimated votes as you would by opening a field office which is about $21,000 dollars to maintain throughout an election season.”

It’s both cheaper and more effective to round up boots on the ground, and yet, a number of candidates haven’t focused on it, at least not so far.

“Both Hillary Clinton and Bernie Sanders had over 20 field offices in Iowa, Republicans I don’t think any candidate had more than five,” said Darr.

Donald Trump’s performance in Iowa has widely been blamed on his lack of volunteer organizing.

“It is something that a lot of candidates particularly those who are somewhat new to presidential campaigns don’t always take very seriously,” said Seth Masket, chair of the department of political science at the University of Denver. “They and other campaign managers certainly see the examples of other candidates and the advertising that they do, the speeches they give, the debate performances, those are the most visible aspects. The ground game is below the radar so most candidates don’t think about that the first time out.”

At the same time, networks of lawn-trodding volunteers aren’t something you can just whip up overnight, and the people who build these networks are not a dime a dozen.

“You can hire people in any given state but if they aren’t the people who know the influencers in every town, every county and every precinct, it’s not gonna do you any good,” said Jacobus, the Republican strategist.  “There’s… a limited number of people to invest in and in a very large crowded Republican field everyone’s trying to get those people.”

Campaigns may need to spend heavily to create the national presence that will allow them to command legions of volunteers in the first place. As the field narrows, those networks will be inherited and consolidated, Jacobus said.

The lesson of the ground game isn’t a hard one to learn, but nobody get sto the general election without learning it.