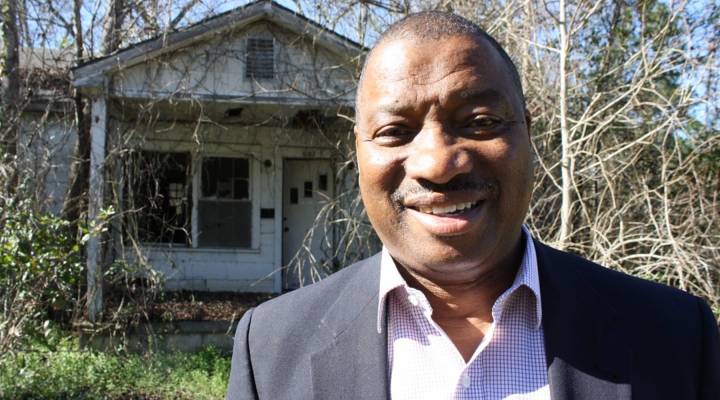 COPY
Allendale County Alive's Wilbur Cave in front of a dilapidated house in Fairfax, SC. Cave's organization bought 14 homes in similar disrepair and renovated and rented them out to low-income families. Caitlin Esch/Marketplace

Allendale is the poorest county in South Carolina — a third of all residents live in poverty, according to the Census. So the Obama Administration has named Allendale County a Promise Zone, along with five other counties in rural South Carolina.

That means the region will be prioritized for federal grants and loan packages aimed at reducing poverty.

Wilbur Cave is with Allendale County Alive, a non-profit affordable housing development organization. He hopes the Promise Zone will allow his organization to expand and do more of the work it’s already doing in the rural south: Develop affordable housing for very low-income renters and help people build wealth through home ownership.

About a year ago, Cave helped 63-year-old great-grandmother and former construction worker, Alfreda Scott, do something she never thought she’d be able to do: Buy her own home.

It wasn’t easy. Scott lives off a fixed income. She had to learn to save money and improve her credit score.

“They had home buyer school, the first home buyer’s class they had—well, I ain’t got nothing else to do, I’m gonna go see what this is about,” Scott said.

Allendale County Alive worked with Scott for three years and helped her qualify for a special USDA Rural Development loan — it offers 100 percent financing and a 33-year repayment period.

“It did go through some years, and at times I was ready to pull out my hair, give up on it,” Scott said. “I think I turned Mr. Cave over there pretty grey too.”

But it’s cases like Alfreda Scott’s that Wilbur Cave is desperate to see more of in this community.

Driving down a rutted rural street, past dilapidated mobile homes, and houses his organization has built, Cave said he’s optimistic.

“Sometimes the pace of progress is so slow that you can easily become discouraged,” Cave said. “[But] you just have to be optimistic because if you’re not, it’s going to be very difficult to convince that family who has never owned a home that they can become homeowners.”