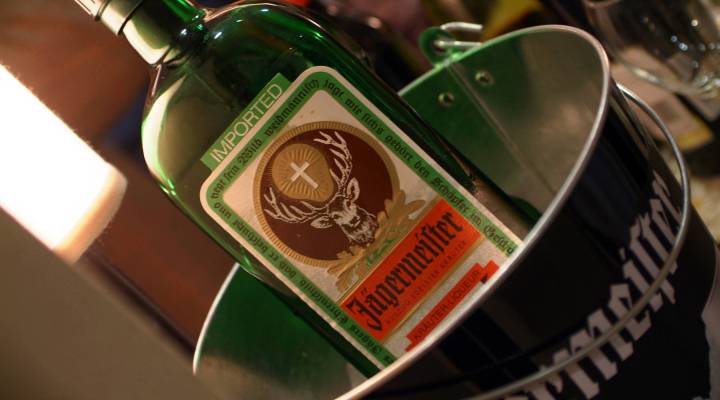 COPY
The drink best known for drunk college bros is trying to create a new image while maintaining the Jägerbomb spirit.  lincolnblues/Flickr

The drink best known for drunk college bros is trying to create a new image while maintaining the Jägerbomb spirit.  lincolnblues/Flickr
Listen Now

Nils Boese is about to describe in breathtaking detail the drink in his hand, a European liqueur. His face tense with concentration, he slowly sniffs, sips and then launches a long and lyrical description of its complexities, offering tasting notes full of herbs, spices, sugar and fruit. He goes on for several minutes without pausing. It’s a bit much, but not totally surprising, as he is a very serious German bartender visiting a very serious New York bar. The Up & Up cocktail lounge serves complicated and expensive drinks in a subterranean space.

What’s unusual is the name of the murky liquid in his glass, a beverage one doesn’t expect to bump into in a bar like this. It’s a drink with a strange and fascinating past, but a deeply uncertain future. Like a classic immigrant story, it crossed the Atlantic with long odds of making it in America. But it became an improbable smash success, lifted to great heights by a clever entrepreneur who made up a story that stuck, becoming a billionaire by pioneering techniques that are now among the most powerful in the dark arts of modern marketing.

But life is tough these days for this once high-flying immigrant beverage. The invented story that sold so well for decades isn’t working the way it once did. Sales have fallen dramatically. Now the drink’s makers feel the need to tell a drastically different story, one pulled from deep in the drink’s past. It’s a phenomenal risk, something no company has attempted before. It is what brought them to fly Nils Boese to this bar.

The drink in his glass is Jägermeister.

Yes, Jägermeister, the fuel that powered the ship that carried a thousand drunken bros.

Seeing it in such a refined bar triggers that same feeling as when you start to notice that lots of people are suddenly wearing Crocs or drinking coconut water or whatever. It’s a strange sight. But it’s rarely an accident. Companies invest major time and money in building such trends. You typically never see how these kinds of things begin.

Jägermeister is making a perilous wager that it can start one right here in a noisy bar. Faced with a declining business selling shots as it is menaced by new competitors, the company has decided on a strategy, breaking with cherished rules of marketing by trying to tell two different stories at the same time.

The company is still telling its invented story of Jäger as a party drink built for shooting. But now it’s also trying to reach more refined drinkers by playing up its European heritage, complex ingredients and barrel aging. It’s a tale that happens to be true, but it’s jarring because it’s such a very different image than the company has been touting for decades. This unprecedented embrace of a two-headed brand strategy has many skeptics.

“Branding is telling a consistent message that resonates to a particular group of consumers that you’ve defined as your target that you’re trying to go after,” explained Wharton School marketing professor Americus Reed. “So, no marketer I’m aware of attempts to try to have two different messages to two different groups because it’s just too dangerous.”

But Jäger is marching ahead, hiring people like Boese to talk the drink up to a carefully selected audience. They’re trying to get influential bartenders and drinkers to embrace a story that’s about flavor and craft, not shots and pukey frat guys. But it’s a tough gig. To understand just what they’re up against, we need to step out of the bar and into the drink’s strange history.

With a difficult-to-pronounce name and an even more challenging bitter flavor, nobody saw potential for Jägermeister in the American market. Except one, who knew he had something after a single sip. Everybody he ever worked with remembers what he said about it.

In the 1980s, Frank took a drink for old German men and turned it into a young party drink, into the young party drink. He singlehandedly created a category that the liquor industry now calls “challenge shots.”

“It kind of came out of nowhere,” said Donna Hood Crecca, who follows the drinks business for food and beverage consultancy Technomic. “It was one of the first brands that was built through really no marketing dollars in terms of advertising and commercials.”

Frank did it by hiring attractive women, dressing them in skimpy Jäger outfits and sending them into bars to pass out shots. It doesn’t sound very original now, precisely because the whole drinks world copied the tactics he invented after he shocked the industry by making Jägermeister a hit.

“As far as beverage alcohol in the United States, I think it’s probably one of the top five achievements in the last 50 years,” said Ted Wright, CEO of Fizz, a word-of-mouth marketing company.

Frank actually had two of those achievements under his belt. He also created Grey Goose vodka basically out of thin air, later selling it to Bacardi for more than $2 billion.

Frank was a colorful and generous billionaire. When he died in 2006 at age 86, obituary writers had plenty of juicy details to choose from, such as the $24 million bonus he gave his secretary and his extensive collection of homes and private chefs. He once left Brown University because he was too poor to pay tuition. As a rich man, he showered the school with tens of millions in scholarship money. When he got too old to play golf, he hired professionals to play private matches for him.

Since Frank’s passing, Jägermeister has had a tough time in America. Its sales volume has been declining for years, falling another 7 percent in 2014, according to Technomic. Understanding why is obvious if you visit a certain type of bar and know what to look for.

One of them is in Philadelphia, called simply Irish Pub. On weekends, it draws a young and rowdy crowd. I stopped in and managed to convince Americus Reed to come along. He is definitely not a regular here, though the place caters to a lot of the Wharton MBAs he teaches. We were there to get a first-hand look at the difficult challenge Jäger faces.

“When I first started about 3.5 years ago, we used to sell a lot of Jägermeister,” said bar manager Sean Stenstrom. “After that, the Fireball craze kicked in.”

As Jäger’s volume faded, Fireball Cinnamon Whisky exploded to a whopping three million cases, surging to the lead in the shot category Jäger invented. Now the company thinks its old story of shooters and parties isn’t enough in a new environment thick with tougher competition. It needs to set itself apart and expand its reach, or else a storied brand could fade away.

And yes, before leaving the pub, Reed and I did shots of Jäger. It was necessary for branding research, we promise. For Reed, it was his first in about 20 years and it brought back memories of his student days. That common reaction shows just how powerful Jäger’s invented story as a college party drink is. It drowns out the true story of its flavorful history.
The company concedes the challenge of selling Jäger to cocktail nerds and understands the risk of alienating shot drinkers, many of whom could find the craft story pretentious. But it believes the message will appeal to the shot-glass crowd too.

“For them, it’s super important that taste and quality is right,” argued chief marketing officer Marcus Thieme. “In Jägermeister, there’s so much work and effort put into the product and we never talked about it.”

He cites internal marketing data showing the message is getting through. And he says the company will put more money and staff behind the new message in the months ahead. It’s another unexpected move from a company famed for groundbreaking marketing. And some people think it can pull it off.

“People that are influencers in booze, that they’ve never thought about Jägermeister in this way before, that’s going to be interesting,” said Wright, the word-of-mouth marketer. “When they go to a party and they’re like ‘Yeah, make me a Negroni with Jägermeister,’ everybody at the table is going to go ‘What? That’s crazy!’ And then they get to tell this story.”
Wright thinks Jäger’s heritage story could be a winner if it gets to the right people.

But back to the liquid fact-finding mission Americus Reed and I are on. We step into The Franklin Bar to meet a real-life influencer, one Jägermeister is courting hard. Sara Justice runs the trend-setting cocktail establishment. Jägermeister reps have hit up her bar multiple times. But they have failed. It’s not in any of Franklin’s signature drinks. She won’t even carry it.

“What if someone is sitting at our bar and sees it and it’s like, ‘Oh, let me just do shots of that.’” Justice imagined. “That’s not really what we do here.”

“When I left the previous bar I felt a bit more optimistic. That could have been the Jägermeister effect from having slammed one of those shots back,” Reed mused as we wrapped up our research with non-Jäger cocktails from Justice’s pros. “It’s going to be very difficult for Jägermeister to use the strategy to influence these sort of very serious cocktail artists.”

Donna Hood Crecca, the beverage industry watcher, is skeptical too. But she’s also riveted by what Jäger’s attempting. “It’s part of the fabric of the alcohol industry,” she said. “In a sense you’re rooting for it because it was such a colossal, colossal brand at its height. It was a breakthrough product. It has been hard to see it lose so much ground.”

Which brings us back to the New York bar where we started, listening in as Jägermeister’s ground troops try to claw that ground back. Sure enough, The Up & Up’s menu now has a cocktail with a little Jägermeister in it. (Though in keeping with the house reputation for complexity, it also has rye, rum, grappa, nutmeg and of course, pistachio orgeat. It’s actually pretty good.)

Nils Boese, Jäger’s profane and poetic ambassador, ponders the victory as he takes a sip. “It’s like an invitation to gaining the trust of a more serious drinker,” he said. “This kind of drink is an outstretched hand.”

Whether enough people take it will determine whether Jägermeister’s risky new marketing strategy will end in the kind of surprise win that made it famous.