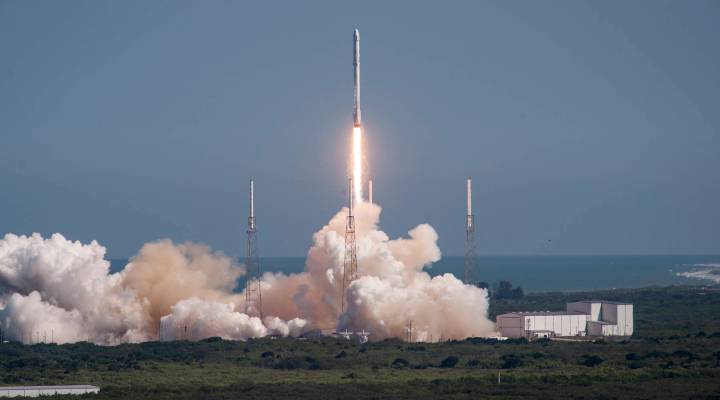 Companies like SpaceX and Virgin Galactic are creating a new, private space race, and that has some rural areas fantasizing about the roles they could play in the $300 billion-plus global space industry. For instance, in Georgia, Camden County hopes to build a private spaceport and create Georgia’s own space coast.

Last December, hundreds of people turned out for a meeting about the spaceport, which would be built near the Atlantic coast. Bob Shepard, like the vast majority of people there, was excited about the idea. “I think it would be tremendous not only for the county in whole, but the other businesses it’ll attract,” he said.

Shepard’s 13-year-old son Thomas said he imagines one day he might work there, but for now, he’s looking forward to a launch. “I would like to see it go off in the backyard,” he said.

Camden County is in the far southeastern corner of Georgia. It’s largely rural, and its biggest employer is a Naval base. The 4,000-acre site that’s proposed for the spaceport was once used by a chemical company. Now from the road, there’s not much to see there. It’s very flat Georgia coastland with grass, trees and a lot of gnats.

But Camden County administrator Steve Howard, who’s also the lead booster for Spaceport Camden, has a vision for the place. “Camden County really went from a mill town to a military town,” he said. “And I think we have the opportunity to really do something great here.”

Camden County, Ga. administrator Steve Howard is leading a county initiative to build a commercial spaceport on a former chemical site near the Atlantic coast.

There are eight commercial spaceports up and running in the country, according to the Federal Aviation Administration (FAA). Camden’s is one of several more that are proposed.

The current rush to build spaceports is in response to the expanding demand for small satellites, said Micah Walter-Range, director of research and analysis for the Space Foundation, which is a pro-space industry non-profit. He said companies want to get all their GPS, phone and video satellites into orbit. But whether the demand for satellite launches will keep expanding enough to sustain all the new spaceports that could open, is still up in the air, he said.

“I think a lot of the demand for spaceports is somewhat speculative,” said Walter-Range.

One is already in financial trouble. Spaceport America, in New Mexico, has failed to bring in the revenue it expected. It’s now asking for millions of dollars from the state.

The key is to not just build a spaceport, but to build an entire space industry, encouraging new startups, and attracting existing companies, said Bobby Braun, an aerospace professor at Georgia Tech. And he said if a “Georgia space coast” is hard to imagine in a rural corner of the state, just look a few hours south, to Cape Canaveral.

Now, Cape Canaveral has not just rockets, but also tourists and industry. That’s likely a transformation places in Texas, Alabama, Colorado, Hawaii and other states are all imagining, as they gun for their own private spaceports.

There is some opposition to the Georgia proposal. “There’s a whole bunch of questions that we have,” said Megan Desrosiers, head of the Georgia environmental organization One Hundred Miles. “They’re both related to the human impact, and the public health and public safety risk, as well as the environmental impacts and risks.”

For instance, what happens if there’s a crash? What will the effect be on a nearby river and marshes? What will this mean for nearby homeowners?

But local booster Steve Howard is not deterred. He said he dreams of a highway sign, greeting people driving into the state.

“Wouldn’t that be a great thing for Georgia if it said, ‘Welcome to Georgia’s space coast’?” he said.

Pending approval from the FAA, said Howard, that could be a reality in about five years.