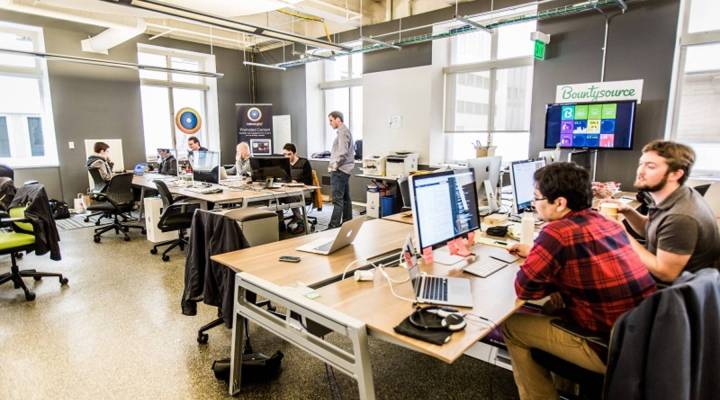 Tyson Quick launched his San Francisco tech company, Instapage, entirely with foreign freelancers. He found them through Upwork, a website where you can contract workers. “Before platforms like Upwork,” Quick said, “you pretty much had to raise a ton of money so you could hire the in-house talent to grow your business.”

The tech industry is known for outsourcing jobs to stay lean. Contractors do PR, sales, even IT work. Big tech companies have been using the outsourcing business strategy for years. But now, because of the on-demand labor in what’s known as the “gig economy,” even the smallest tech company can outsource work.

It was once hard for small companies to find freelancers, especially cheap workers overseas. But now because of a wave of companies like Upwork, Wonolo, and 99designs, even the tiniest company can use an app to order freelancers.

“Literally you have to do nothing now,” Logan said. “You just have to sit and make decisions and other people will do all the work for you.”

Cory Jones heads marketing for a company at RocketSpace called Skyroam. He said he often contracts gig workers on Taskrabbit. “I’ve Taskrabbited everything from some design work to helping to deliver food, as well as installing a pull-up bar.”

Logan also uses gig workers. He contracted a freelancer from 99designs to create RocketSpace’s logo, a big rocket. He said was made in Vietnam by some guy he never met. Logan paid $200 dollars for the work and used the design for four years.

Logan has noticed that gig hiring follows a pattern. Small companies use lots of freelancers to get off the ground. As the businesses grow, they bring on more full-time people, partly because it looks good for investors. Then if the corporation hits it big, it goes back to outsourcing large chunks of its business.

Logan calls the increasingly reliance on gig workers the “lack-of-commitment” economy. Companies don’t have to commit to workers and vice versa. Rutgers University professor Hal Salzman has a different name for it: outsourcing. And he’s not impressed with the new branding.

“Outsourcing has become an unpopular word,” Salzman said.  “Recasting it as the ‘gig economy’ sounds much better.”

The only thing new with these gig websites, Salzman said, is that smaller and smaller companies can now cut worker pay and ship out jobs. That’s good for businesses, but bad for society, he said. “The next great app can be a lot of fun to use. The next service may be great to have,” he said. “It’s the bigger picture. What cost is to the economy? What’s the longer term future for the workforce and overall for the quality of life?”