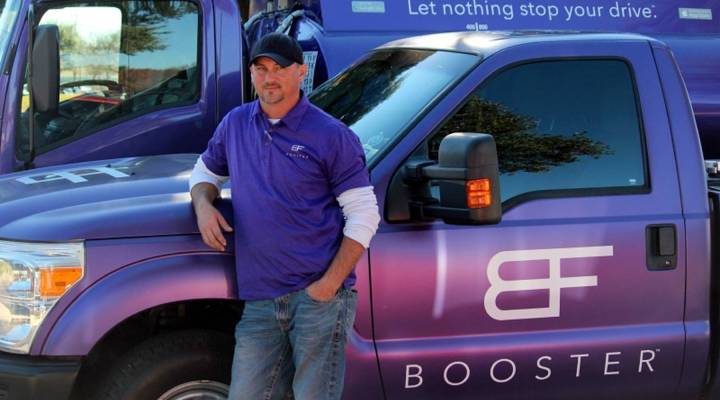 COPY
William Rich used to deliver gas to gas stations in Houston. Now, he works for Booster Fuels in Fort Worth, and he thinks on-demand is the future of fueling Christopher Connelly

William Rich used to deliver gas to gas stations in Houston. Now, he works for Booster Fuels in Fort Worth, and he thinks on-demand is the future of fueling Christopher Connelly
Listen Now

Gas stations may be facing a fight for the fuel tank. A new startup operating in Fort Worth, Texas, and Silicon Valley wants to bring the fuel to you, courtesy of an app. It’s one of a few app-based fuel delivery companies looking to shake up the pump game.

Elizabeth Tolentino has been using the service for four months. The marketing assistant absolutely hates going to the gas station, so she used to put off filling up as long as possible. She used to keep a gas can in her trunk because she had run out of gas. She even ran out of gas at the gas station one time.

“Every time I tried to get to a pump someone else would take the pump before I got there,” Tolentino said. “So I actually ran out of gas in the gas station while trying to find a pump that was open.”

No more awkward moments like that, though. Now, when her black Honda Civic coupe is low on gas as she rolls into work in the morning, she opens the Booster Fuels app, toggles the map to her location, and orders a fill up. The app reminds her to make sure her gas tank is unlocked and tells her the fuel will arrive before 4 p.m. Then, it’s off to work.

“What we do is is fundamentally the 21st century way to deliver a product like this,” says Frank Mycroft, who founded Booster Fuels.

Frank Mycroft is the founder of Booster Fuels.

The 30-year-old used to work for NASA, and for a company that wants to mine asteroids. But he wanted to use his logistics expertise to solve more terrestrial problems. The birth of his daughter cut into his tolerance for spending time doing mundane tasks. Americans make an estimated 37 million trips to the gas station to fill the tank every day, according to the National Association of Convenience Stores, which represents 127,000 gas stations in the U.S. Mycroft says that adds up to a lot of wasted time.

“The fact that we get thousands of families that extra 15 minutes a day to do whatever it is they want to do, that feels really, really good,” Mycroft said.

But delivery is a tough business model, said Suresh Kotha at the University of Washington’s Foster School of Business, especially for gas. Once you take out taxes and the base cost of the gas itself, he says, there’s not a lot left over and that has to pay for marketing, IT and personnel before you even get a penny of profit.

Ben Bentzin, a lecturer at the University of Texas McCombs School of Business, said sticking to denser areas is the key. Right now, Booster is only serving a handful of office parks in North Texas and Silicon Valley. The company’s two competitors also serve narrow areas. “They’re going to have to think about how they can market this in a way that gets the attention of the customers they want — those who are in dense areas — without being too annoying to those who love the concept but can’t be served,” Bentzin said.

Then there are safety concerns — gasoline is a hazardous material after all — and there are regulations to make sure gas stations can handle fires or spills. Booster Fuels said it hires experienced drivers with haz mat training.

Out in a call center parking lot on the edge of Fort Worth, delivery driver William Rich unrolls a long hose from one of Booster’s purple trucks. He flips on a pump to start filling up a sporty BMW.

The gas going in is a few cents cheaper than it is at the station down the street. While the gas is pumping Rich cleans the windows, then writes a hand-written note saying thanks. It’s old-school service for what he thinks is the future of fuel delivery.

Even if this is how we all fill up in the future, you’ll still have to stop off for the Slushies and Slim Jims. For now, Booster has no plans to deliver those.