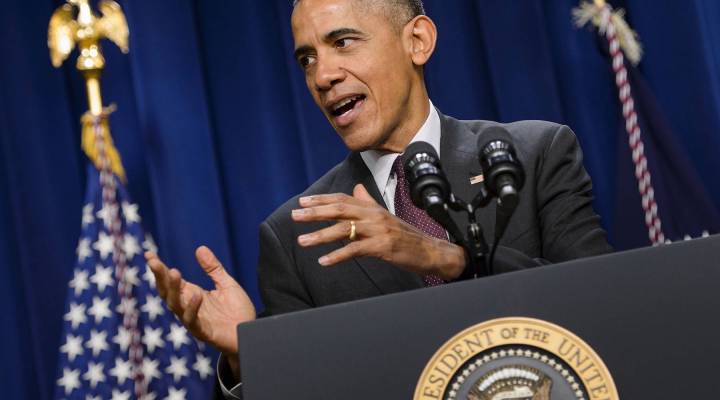 COPY
US President Barack Obama speaks about equal pay during an event to mark the 7th Anniversary of the signing of the Lilly Ledbetter Fair Pay Act January 29, 2016 in Washington, DC. BRENDAN SMIALOWSKI/AFP/Getty Images

US President Barack Obama speaks about equal pay during an event to mark the 7th Anniversary of the signing of the Lilly Ledbetter Fair Pay Act January 29, 2016 in Washington, DC. BRENDAN SMIALOWSKI/AFP/Getty Images
Listen Now

Friday marks the seventh anniversary of the Lily Ledbetter Fair Pay Act — which President Obama signed into law. The act makes it easier for employers to file lawsuits regarding equal pay for up to 180 days after a discriminatory paycheck.

Today, President Obama announced new policy changes he said will help advance the cause of pay equity. One proposal would allow the Equal Employment Opportunity Commission (EEOC) to annually collect summary pay data by gender, race, and ethnicity from businesses with 100 or more employees. The administration said this rule would cover 63 million workers.

But don’t get too excited, the changes probably won’t allow you to see how much money your colleagues make. Ariane Hegewisch is a study director at the Institute for Women’s Policy Research.

“What the EEOC is planning to do is analyze the data and to prepare regional industry metrics,” she said.  “Once we put all those figures into a statistical model, you can then identify the companies that are clearly below par.”

The Obama administration said this move will help the EEOC spot discrimination, and highlight regional trends in pay disparity. But companies don’t usually like to report this kind of pay data.

Nancy Hammer of the Society for Human Resource Management said in a written statement to Marketplace that companies already spend a lot of time and money compiling information for the EEOC, “and the employer community is skeptical about whether aggregate pay data will help identify patterns and focus enforcement on industries that may have pay discrimination.”

Hammer also said companies are worried about privacy, since “compensation data is especially sensitive and confidential, as it necessarily provides insight into an organization’s competitive strategies, internal costs, and other valuable business details.”

Even though the primary goal of the administration’s initiatives is to provide data for the EEOC, the aggregate data could be useful for workers, according to Emily Martin,  general counsel and vice president for workplace justice at the National Women’s Law Center.

“I think you will be able to look up how much employers in that locality are paying people by race and gender in that occupational category,” said Martin. “And that’s really a lot more information than we have had in the past and I think is really helpful for employees in getting a sense of what their skills are worth in the market.”

More importantly, Martin said, once companies start compiling all this information, they can’t claim they didn’t know a gender or race wage gap exists in their workplace.