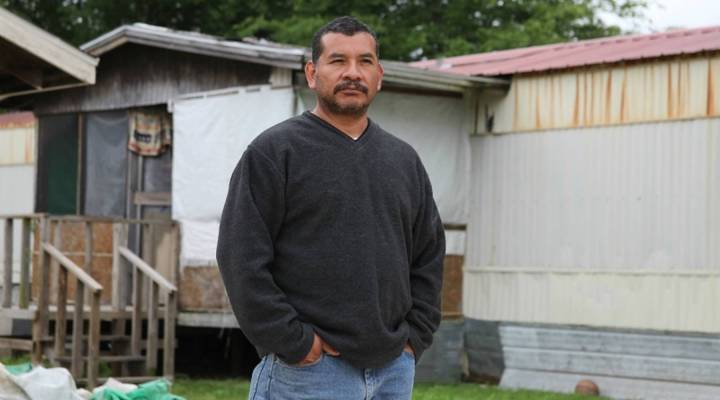 Angel Castro used to live down an old, muddy road during the 1990’s behind a large John Deere store in Kennett, Mo. “This is one of the trailer parks that rent to migrant people,” he said.”It’s not in the greatest shape, you know? But if you need a place to stay you have to do what you have to do.”

Dozens of trailers and campers sit on lots littered with plastic bottles and food wrappers. Large tires hold down roofs, siding is falling off the mobile homes and cracked windows are covered up with plastic. Castro said during growing season, these trailers pack in up to ten farm workers. “Right here, I think they charge you by the head,” he said. “It depends on how many people are staying in the trailer. I think it’s like $120 a month a person.”

During the growing season, these trailers are packed with seasonal farmworkers in the rural community of Kennett, Mo.

Current residents declined to comment on the record, and the owners of the trailer park did not respond to a request for comment.

Castro’s family spent summers chasing the watermelon crop from state to state as migrant farm workers. Now, he has a job recruiting farmworkers’ kids to enroll in school programs. “My sister used to cry, ‘Oh look at the places we live in.’ And my dad would say, ‘It’s only a month. Just ride it out a month and we’ll be out of here,’” he said.

Today more farm workers are settling down, some in ramshackle housing like this. Indeed, the U.S. Department of Agriculture says about three-quarters of hired crop workers are settled and work within 75 miles from home.

But migrant workers who pick crops like cotton and melons in the U.S. can have a tough time finding a place to live. The rural areas where they can find work often lack the social services and affordable housing. That means many farm worker families end up in dilapidated buildings, which can come with health risks.

“There is a big need across the country,” said Tony Hernandez, Administrator of the U.S. Rural Housing Service. “There is probably more need than money we have.”

Generally there are three types of housing options for farm workers: Private housing like the trailers Castro lived in, employee housing provided by a boss, and government funded housing.

The U.S. Department of Agriculture lends money through a federal program to build farm worker housing. Hernandez says it’s critical to provide housing for the people who help get Americans’ food to the table.

“It’s not that long ago farm worker housing was nonexistent in a lot of places,” he said. “This is really an effort to make safe and decent housing and better working conditions and housing is a big part of that.“

Hernandez said while creation of farm worker housing has improved through the program, there is competition for loans and some projects don’t get funded immediately. The program is dependent on how much money Congress allocates for it, which is in flux.

That leaves some farmers to build their own housing. Peach producer Bill Bader built a handful of single-family homes and bunkhouses on his property.

“They’re not a Holiday Inn, but they’re comfortable with it,” he said. “They’re air conditioned. They (have) good water.”

But farm worker housing is scarce. “Farm workers don’t make a lot of money. They don’t have a lot of options. The housing that they are able to find is often substandard,” said Virginia Ruiz, the director of occupational and environmental health at the Washington, D.C.-based advocacy group Farmworker Justice. She says farm workers are often priced out of rural rental markets that lack the resources, infrastructure or desire to build affordable housing and end up crammed into rundown trailer parks.

“You also see often overcrowding which can also be harmful psychologically,” she said. “It’s very stressful. It’s easier in overcrowded housing for diseases to spread.”

Tuberculosis, pesticide exposure and viral breakouts are a few of the more common threats facing farm workers living in housing without adequate showers, ventilation and utilities, according to county health officials.

“Practically every state has a lack of enforcement,” said Moises Loza, the executive director of the Housing Assistance Council. The national group works to improve housing conditions in rural areas. He says enforcement on housing codes doesn’t happen often enough because of limited resources. And you’re not going to hear the tenants raising a fuss about the conditions either.

“They’re uninformed about what rights they might have or what codes there are in housing,” he said. “But even if they did know, they’re also afraid of getting immigration after them.”

Angel Castro now lives with his family ten miles away in a town with a burgeoning Latino population. He said he’s fortunate to have worked his way out of the crop picking trade and the trailer park. But he says as more migrant workers settle, affordable housing will become crucial to maintain a healthy workforce for farmers.

“When you don’t have the money or the means to get somewhere else or buy somewhere else, you do what you have to (to) survive. To live,” he said.