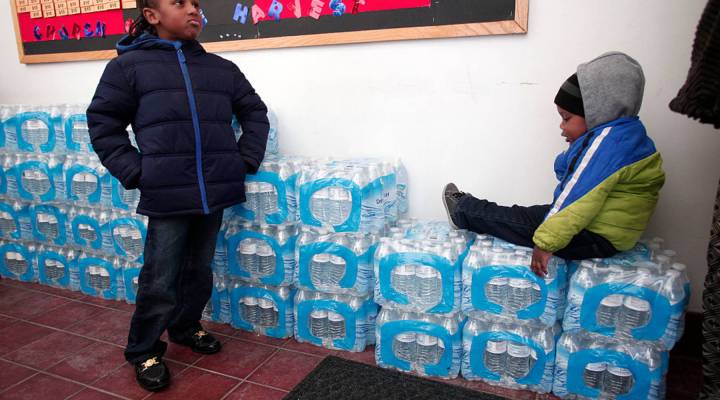 The Michigan Legislature voted today to send another $28 million to Flint to help with its water crisis.  Flint will face many long-term costs,  but the biggest ones will likely be felt by children. Of the skills you’d expect a typical 12-year-old to have, filtering lead is not one of them.

Take Savannah Liddell. Savannah and her family still aren’t drinking city water. They’ve got cases of bottled water stacked up in the hall of their apartment, and while the city gives out a case of bottled water a day, that doesn’t really cut it for Savannah, her two brothers, the cousins who stay there, and her single dad, Phillip, who is currently unemployed.

“With this water … I might spend about a $100 I don’t have,” said Phillip. He’s even given his kids new rules about how to take a shower.

“Instead of using bar soap, I used the body wash and, I’d tell them to take a shower, put the body wash on you first, lather with body wash without the water then pursue taking a bath. ‘Hurry up and get out of there’,” Phillip said he tells them.

Like a lot of parents in Flint, Liddell is on the lookout for signs of lead damage in his kids.

So hundreds of parents were getting their children tested this week in Flint. Bringing their kids to a “Family Fun Night and Lead Testing Event” at one of the city’s schools.

There were balloon animals, toys and volunteers being as perky as possible. But squirming toddlers still had to get their fingers pricked repeatedly to draw enough blood to fill a little vial.

Evelyn Woods brought her five-year-old Bethany for testing. Bethany got a stuffed dog after her test.

“I just told her she had to go get poked and get tested for lead and make sure she’s okay,” Woods said.

Brian Jones, a first responder for Livingston County Michigan, draws the blood of Amaria Roberson of Flint, to screen her blood for lead at Eisenhower Elementary School in Flint, Michigan.

The tests, which were paid for by the county health department, will come back in a week or two. But lead levels are only detectable for 30 to 40 days. So kids could have been poisoned months ago, and it wouldn’t show up now. The place where any long term damage will show up is in school.

Eileen Tomasi is the Flint school district’s nurse, the only nurse for the 5,500 students that attend Flint public schools.

“Some of the psychologists in the district have said the little kids, the three, four and five-year-olds that they’re testing, that they’ve already seen a difference. They’re not where they should be right now as far as like sociability skills that they test the little ones. This is going to be an ongoing issue for years and years and years. It’s a whole generation here that’s been poisoned. So the impact on the schools will be huge,” said Tomasi.

Flint schools are deep in debt. This year, the school system hopes to have a budget deficit of $10 million. That’s down from a $21 million deficit last year.

It’s unclear how a system so strapped, even before the lead crisis, can handle this.

The Flint superintendent Bilal Tawwab said the schools will need more special education teachers, more nurses, and more early childhood programs. He says they hope to get more money from the state, and described the situation as an education emergency.

One where the mistakes of adults are being paid for by kids.