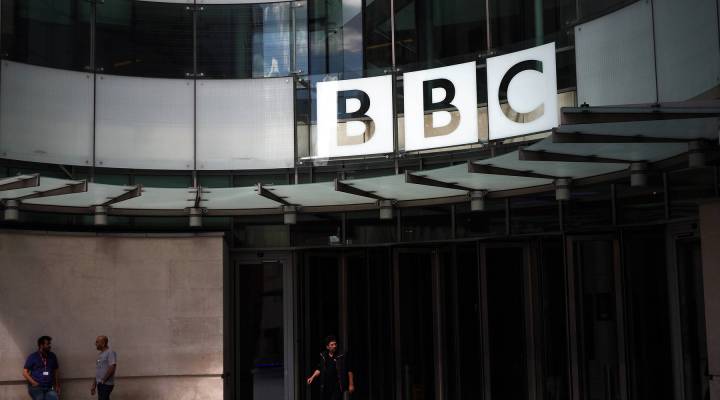 COPY
The people stand outside the Broadcasting House, the headquarters of the BBC in London, England.  Carl Court/Getty Images

The people stand outside the Broadcasting House, the headquarters of the BBC in London, England.  Carl Court/Getty Images
Listen Now

One of  the world’s best known broadcasters – the BBC – is heading into something of a financial crunch.

The Beeb – as it’s known in Britain – depends for its income on a national tax called the licence fee. Not everyone pays. Every Brit over the age of 75 is exempt. But the British government has told the corporation that it must pick up the tab for that exemption.

“That’s almost $900 million a year – a huge chunk of the BBC’s budget,” said Tim Luckhurst, Professor of Journalism at Kent University. “That would definitely lead to the BBC having to reduce the number of services it provides, the number of original programs it makes.”

One plan under consideration by the BBC is that elderly viewers could be asked to give up their exemption and pay the tax on a voluntary basis. That proposal did not go down well among retirees in a straw poll that Marketplace carried out on the streets of Oxford.

“No, definitely not!” said one woman. “We’re entitled to the exemption.”

“We pay our taxes all our working lives and then they hit us with this suggestion when we’re pensioners. It’s unfair!” declared one expensively-dressed, elderly gentleman who nevertheless enthused about the quality of BBC programs.