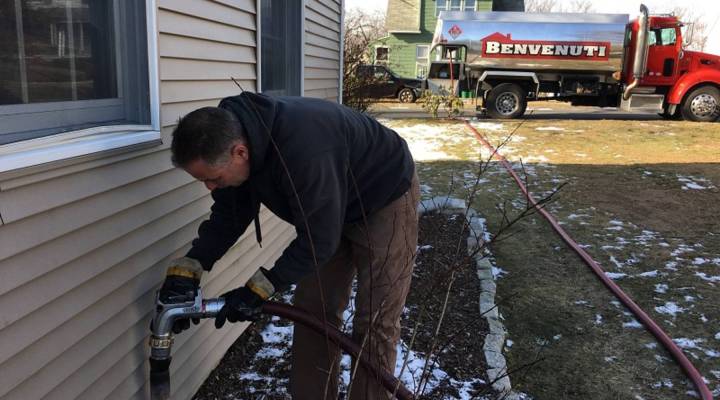 Theresa Carter enjoys a joke with delivery driver Andy Kane as he fills the oil tank at her home in Waterford, Conn. on a chilly January morning. The two go way back; Kane’s wife has coached Carter’s kids in softball. That kind of community connection is common with Connecticut’s 500 or so family-owned oil companies. Many count on their customers’ loyalty in decades.

This winter, Carter doesn’t have to wince when she sees the oil truck coming. She said her family’s paying about half what they did last year to heat their home, even with a new addition. That break in the price means she and her husband have quit fighting over the thermostat.

Plunging oil prices are proving to be a boon for about six million homeowners in the Northeast who heat their homes with oil.  But it may also lessen the appetite for conversion to other fuels – a movement that had been gaining ground.

“Our customers have saved a ton of money without having to sacrifice anything,” said Marc Mazella. He runs Benvenuti Oil, the company that delivers to Theresa Carter’s home. Benvenuti was founded by Mazella’s grandparents out of their own house in 1950. Mazella says despite the comparatively mild winter in the Northeast his customers are actually using more oil than they would in the past in similar weather – just because they can afford to feel comfortable. On average, his customers will use about 875 gallons this winter, and they’ll still save more than a thousand dollars over last year.

“I know we’ve been reading a lot about and hearing a lot about energy prices falling and its taking down the Dow, and huge loss for this and that,” said Mazella. “But the bottom line is it’s putting more money in people’s pockets.”

Mazella is also pleased that his customers may feel less inclined to switch fuel sources. In 2012, citing high oil prices Connecticut Gov. Dannel Malloy  encouraged billions of dollars in investment to build out natural gas lines in the state.  He aimed to bring the fuel to 280,000 new customers. But the gas utility companies confirm they’re now failing to meet their targets for converting households away from cheaper heating oil.

Professor Eric Chen,  who teaches business at the University of St Joseph in Hartford, said that’s a downside of the drop in oil prices. “I think the conversion is actually a decent idea. As a society we should be exploring those kinds of alternatives to see which one comes out best.”

And Chen said while low oil prices are a temporary boon to the Northeast, so far there’s little evidence that consumers are rushing out to spend that windfall.

“Yes, the consumers are finding a little extra in their pocket, but no, the consumers aren’t really doing anything so much about it,” he said. “They still have long memories, and they’re still a little bit conservative and they have a wait and see approach to this.”

But certainly some in the state can’t afford to wait and see. Pamella Nazario is a single parent to two girls — she drives a school bus for a living, and heating her rented house in West Hartford with oil has been a serious hardship in the past.

Pamella Nazario says she is using the money saved from heating oil to buy clothes and school supplies for her children.

“Last year only for 100 gallons I think it was $475, which only last me two, three weeks, the most,” she said. This year, she’s happy that a big chunk of that money can go elsewhere. “I spent a lot of money on clothes for the girls, and actually this year that was a big help because I have extra money to spend on them for things for school and all that.”

And if recent spell of cold weather persists, she hopes the ten-year low in heating oil prices will also continue.