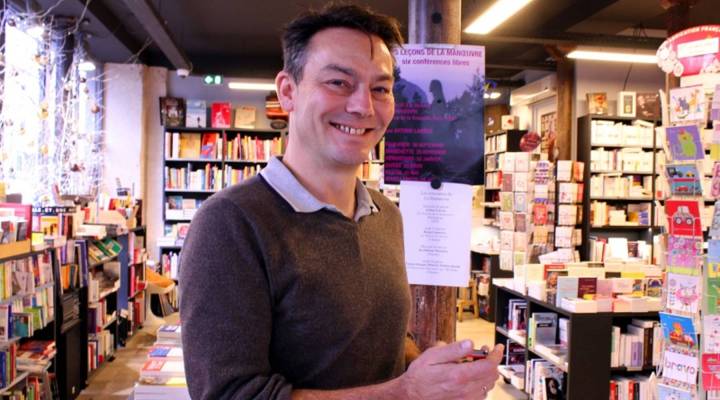 COPY
Jérôme Cuvelier at his bookstore, La Maneouvre, says he did about a million dollars in business last year.  Emma Jacobs

Jérôme Cuvelier at his bookstore, La Maneouvre, says he did about a million dollars in business last year.  Emma Jacobs
Listen Now

Amazon ‘s expected to report earnings on Thursday. You might think by now, the online retailer has left its mark everywhere, especially in book sales. But “vive la difference.”

In Paris, the bookstore most likely known to Americans is the famous Shakespeare and Company, an English-language bookshop on the Seine that has starred in film and regularly has lines of tourists out the door. But attentive U.S. visitors to the city will notice that there are lots of independent bookstores.

Jérôme Cuvelier’s shop, La Manoeuvre, is in a corner of eastern Paris that has pretty much reached peak bookshop. There is one nearly every other block. His spacious shop — with tall windows and stacks of books with hand-written reviews by staff — did around a million dollars in business last year. In ten years, Cuvelier said, revenues have doubled.

The number of U.S.  bookshops is trending up again post-recession, but the number of independent bookstores in France, a country with around 65 million people, is still slightly higher than the U.S., with a population of some 320 million.

How do so many French bookshops survive and thrive in the age of Amazon? In part, Cuvelier credits a piece of French legislation called the Lang Law, passed in 1981. At a time when chain bookstores were just starting to appear on the scene, it prohibited the discounting the prices set by French publishers by more than five percent. Since then, the big retailers have not been able to charge significantly less for a title than a bookseller like Cuvelier.

“That has safe-guarded, I think, the fabric of independent bookshops,” Cuvelier said.

Today, the survival of so many small retailers also helps them to combat the online giants. The bookshops of Eastern Paris have a consortium. Customers who want to order online can do so on the group’s site. Books get sent to the store nearest them for pick-up.

Cuvelier said that because of the density of stores, this can be as convenient as Amazon.

More recently, the French government also banned combining a book discount with free deliveries, another blow to Amazon. The online retailer has called that discrimination against online shoppers.

But there’s also another reason for the resilience of bookstores in France and especially Paris, home to almost half the country’s bookstores as of a 2012 study.

“I think the law is [the] principle reason why we keep bookshop[s] ,” explained Vincent Monadé, President of the Centre Nationale du Livre, or National Center of the Book – a part of the Ministry of Culture, “but also the cultural reason is important.”

The thing about the French, he said, “We love books.”

This book-loving country may also just be more attached to old-fashioned paper. E-book sales represented about 20 percent of books sold in the US in 2014, the last year for which the American Association of Publishers has figures. In France, reported the Syndicat nationale de l’edition, they made up just 2.8 percent of titles sold that year.