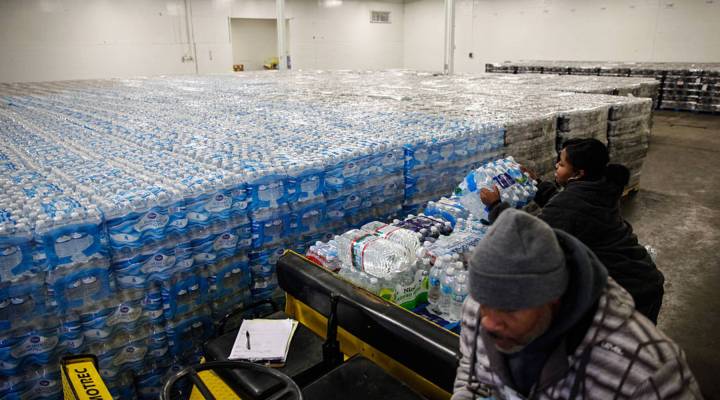 As state officials work to contain the ongoing health crisis in Flint, Michigan, private companies and celebrities are pitching in, sending hundreds of thousands of water bottles into the city.

Walmart, Coca-Cola, PepsiCo and Nestlé pledged Tuesday to donate 6.5 million bottles by the end of the year. The corporate coalition has given more than 867,000 bottles, though some of those were donated long before the crisis started.

Then there’s the celebrities. Cher is sending 180,000 bottles of Icelandic Glacial. A water brand owned by Diddy and Mark Wahlberg is donating 5,000 bottles, and has pledged to give more. Detroit Lions defensive end Ziggy Ansah is in for 94,000, and the list goes on.

The vast majority of those private donations aren’t on the ground yet, and though government spokespeople say Flint’s needs aren’t met, the city is already swimming in water bottles. The state and Red Cross have provided 4.2 million in just the past two weeks. What happens to all those bottles when they’re used up?

“I think that when there are breaches in water quality in the system, when our municipal systems have failed, that private water — water delivered by private companies — is essential,” says Elizabeth Royte, who wrote about the business of bottled water in her book “Bottlemania.”

“But I would rather see it come in larger tankers and have people fill larger bottles to bring home.”

The government has also provided thousands of filters and testing kits, and private companies have promised more of those, too. But bottles are more convenient and efficient — especially for donors like Diddy, who probably doesn’t have filters laying around.

“I know it’s hard for some people to handle big jugs of water, but anything we can do to reduce the amount of smaller bottles is great,” Royte says. “Of course, if they could reuse the bottles, that’s good. And at the bottom of the list is making sure to recycle them.”

That effort has been taken up by Young’s Environmental, a disaster clean-up company based in southeastern Michigan. The company put a dumpster outside its Flint office and offered via a Facebook post to haul away bottles for free. The post was shared more than 2,000 times and the company has put more boxes at other businesses around town.

Operations Manager Stephanie Young said the first load of empty bottles they hauled off Tuesday weighed 680 pounds. The recycling facility isn’t charging, so the only cost to Young’s is sparing a few dumpsters and drivers to move them.

“We don’t do anything with recycling. We haul hazardous waste, we do large, industrial cleaning projects,” Young said. “This isn’t really our line of business, but we have the tools to get this job done.”

Young said the company put out the call after contacting Michigan officials, who were still working out plans for recycling all the bottles pouring into Flint. State spokeswoman Jessi Adler said the state is working in conjunction with the city, county and several recycling companies to roll out locations where Flint residents can bring empty bottles and used water filters.

In the long term the state is also hoping to increase curb side recycling in the city, Adler said.. Right now just 15 percent of Flint residents are signed up for recycling pick-up.

“You’d think most people are concerned about the water, and you don’t realize there are a lot of people who are worried about the after effects of the plastic,” Young said.