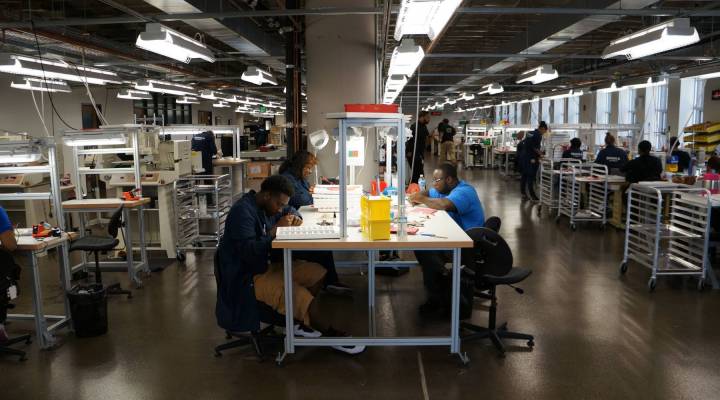 COPY
Shinola employs 260 people at its Detroit facility. Many of them are former auto workers, police officers and hospital workers Tommy Andres

Shinola employs 260 people at its Detroit facility. Many of them are former auto workers, police officers and hospital workers Tommy Andres
Listen Now

There’s a new term out there to describe a recent manufacturing movement in America – “Make-tailers.” It’s a category of “embedded-in-the-community” companies that produce small-batch, high-quality artisan products.

One of the marquee examples of this movement is Shinola. That name probably rings a bell. It used to be on shoe polish containers, and during World War II became a part of the American lexicon when the phrase, “You don’t know s**t from Shinola” became popular. Shinola the shoe polish company went out of business in 1960, and in 2011 Fossil founder Tom Kartsotis bought the name and founded a new company with it. It had been roughly 40 years since an American company had produced watches at scale, and his dream was to bring watch manufacturing back to the U.S.

Kartsosis is from Plano, Texas, but he chose Detroit for his new company’s headquarters and production facility. It was a city with a story that epitomized the underbelly of outsourcing, and four months before Shinola’s first line of luxury watches were made, Detroit declared bankruptcy.

Shinola takes its name from a popular shoe polish company that went out of business in 1960. The current company bought the name back in 2011.

Shinola has been divisive amongst Detroiters. Many see it as a sign of hope that a new form of manufacturing could return to the city. Others criticize Shinola for using Detroit as a marketing tool and take issue with luxury goods produced in a city where most people can’t afford them.

But Shinola’s growth signals corporate success. The company produced 50,000 watches its first year and estimates making 300,000 in 2016. It also makes leather goods, bicycles and even cola. It now has 14 stores across the country and one in London, and last year brought in $60 million in sales. It has also attracted some famous clientèle. Bill Clinton purchased 14 of the watches during a visit last year, and President Obama was recently photographed leaving the Shinola store in Detroit’s Cass Corridor with a watch-sized bag.

The entrance to Shinola’s leather shop in its Detroit manufacturing facility.

Marketplace visited Shinola’s headquarters in Detroit where the company also has its leather shop.