The tech boom has begun spreading across the San Francisco Bay to Oakland, and it’s creating a surge in commercial real-estate spending.

As big companies like Uber move in and more small start-ups set up shop, real estate companies have to stretch their thinking to accommodate companies that want everything from flexible lease arrangements to kombucha bars and community hammocks.

The Port Workspaces, for instance, is developing four co-working locations in Oakland where freelancers and small companies pay a couple hundred bucks a month or more for space — and for the free kombucha bar.

“There will be snacks, there will be food you can order from the food artisans upstairs,” said Joel Pool, CEO of The Port Workspaces. “There will also be a yoga studio, a podcasting studio, and a maker space.”

The location under renovation in downtown Oakland used to be a department store. Pool is transforming the ground floor and will add a basketball court, shuffleboard table, retro video games, and a 500-square foot community hammock made from aircraft wire.

There will also be a slide workers can use to come down from the hammock  after a meeting or, say, meditation session.

These are the kinds of extras tech companies have come to expect around the office, and they don’t stop there.

For example, Salesforce , the software company, will be the biggest tenant in the billion dollar Salesforce Tower when it moves in in 2017. For its investment, it’ll get natural air pumped into every floor, extreme energy efficiency, tech-free zones and flexible work spaces. The company has also signed a 15-year lease.

But for smaller tech companies, long leases could become outdated.

Dan Harvey is vice chairman of CBRE, one of the world’s biggest real estate firms. and the man who helped negotiate the Salesforce Tower deal.

And he says commercial brokerages have to accept these new terms, in order to get this new business.

Harvey has a front-row seat to the culture clash. It’s in CBRE’s grand conference room on the 44th floor of a San Francisco skyscraper. The company was founded in 1906, and the conference room looks like a library, with old books, blueprints from San Francisco history and oil paintings of the company founders. There’s fabric on the walls and dark mahogany wood shelves.

Harvey chuckles as he considers the differences.

“You wouldn’t see this in an AirBNB office,” he said.

But Harvey and other commercial brokers say it’s evolve or die when it comes to accommodating these new kinds of office deals.

Deborah Boyer is executive vice president at The Swig Company, which develops hotels, restaurants and office buildings. She partnered with The Port Workspaces to build the co-working offices in Oakland.

“I’ve been in this business a long time,” she said. “And I think this is the most fascinating time in commercial real estate.”

Boyer says the industry has been slow to change, because it takes years to develop a project and construct a building. But companies can’t drag their feet any longer.

“They’re changing because they realize this is the way it’s going,” she said. “People are going to bring their dogs to work and if you don’t want their dogs in your building you might not rent your space. I think we’re going to start seeing breakthroughs in how we construct buildings and interiors, how to provide real energy efficiency, all of that.”

“There’s so much happening,” said Boyer. “It’s a phenomenal time.” 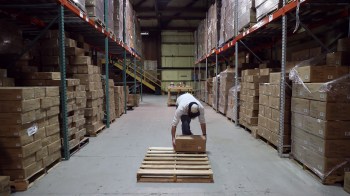