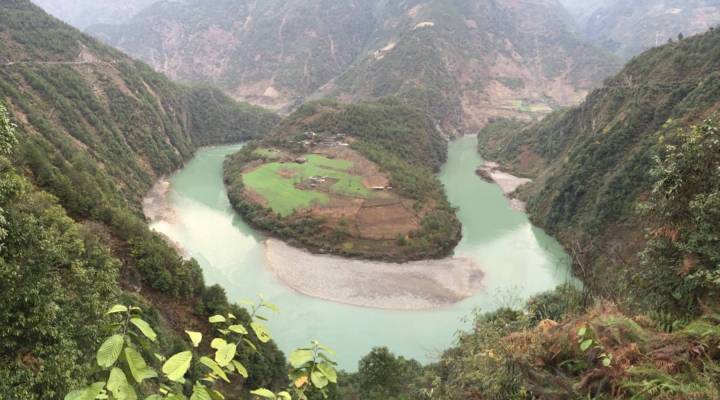 COPY
China's last free-flowing river, the Nu, runs along its border with Burma. For years, government officials have planned to build a series of 13 dams along the river to generate electricity. Environmental groups in China and Southeast Asia have protested the plans. Rob Schmitz/Marketplace
China's Frontier Towns

China's last free-flowing river, the Nu, runs along its border with Burma. For years, government officials have planned to build a series of 13 dams along the river to generate electricity. Environmental groups in China and Southeast Asia have protested the plans. Rob Schmitz/Marketplace
Listen Now

In the mountains of China’s border with Burma, a man named Aluo remembers the faces of the men who destroyed his village. “They were from Fujian, Guangzhou, and there were a few overseas Chinese from Canada and Italy,” recalled the stone-faced Tibetan with a cowboy hat.

Aluo grew up herding sheep here, along a tributary of the Nu River, along China’s remote mountainous border with Burma. But then, one day, the group of rich outsiders arrived to his village, looking to invest. With help from a local contractor, the men built a dam, sold the electricity, and flooded Aluo’s village.

He sold his sheep and moved away. Aluo now lives along the banks of the Nu, the last remaining major watershed in China without a dam. For years, though, the local government has planned to build a series dams along the Nu, too. Entire villages have already been relocated to make way. If the dams are built, China’s last free-flowing river will turn into a series of cascading lakes.

“This river is vital,” said Wang Yongchen, founder of Beijing-based Green Earth Volunteers. “If we lose the Nu River, China will no longer be able to have a single reference for comparison between what is natural and what isn’t.”

Wang’s organization has fought for a decade to keep the Nu River the way it is. But in GDP-obsessed China, Wang admitted it’s been difficult.

Villages on the bank of the Nu river near Gongshan, in southwest China’s Yunnan province.

Fan Xiao, a retired geologist for the provincial government of Sichuan, said thousands of dams have been built in recent years on China’s rivers, earning diamonds-worth of profits for the rich and powerful.

“It’s a uniquely Chinese phenomenon,” smiled Fan. “A local government sets up an investment company, attracts investors, approves and builds its own projects with developers. All of them make enormous profits. They claim this helps alleviate poverty, but it only causes common people more problems.”

Since the birth of communist China in 1949, 24 million people have been forced to relocate for 86,000 dams. What’s worse, Fan said, is many of these dams aren’t even generating electricity. By his count, eight percent of the electricity generated by dams in his home province of Sichuan goes to waste. “We call this ‘water abandonment,’” Fan said, “and in China it’s severe. Dozens of large-scale dams are losing money.”

And this could be the reason why dams on the Nu river have been on hold for more than a decade. Green Earth’s Wang Yongchen claimed the local government is about to scrap plans to dam the river, but a propaganda bureau official in the Nu River region contacted by Marketplace denied this, confirming that plans for the dams were still in place.

Downstream in Burma, where the river is called the Salween, it may not matter. Chinese companies like Sinohydro, Three Gorges, Southern Power Grid, Hanergy Holdings and China Datong Corporation already have plans to build six dams downstream inside of Burma.

“If China’s government should halt the construction of dams along the river inside of China yet Chinese companies are involved with downstream dams, what’s the point?” asked Pianporn Deetes, Thailand and Burma campaigner for NGO International Rivers. “I’m not sure what kind of games they’re playing, but those who will pay the cost are rural ethnic minorities living along the river and its tributaries.”

Deetes said Chinese companies, which have help from Australian engineering firm Snowy Mountains Engineering Corporation, are “rushing to finalize plans” for dams along the Salween to take advantage of the current transition of power inside Burma.

Upstream in China, the Tibetan man Aluo said years after his village was submerged by a dam built by rich outsiders, he happened to see one of them on a bus ride along the Nu river. “He kept bragging to everyone that he was an overseas Chinese who had made it rich. He said ‘I came back to invest, to help my homeland,” Aluo remembered.

After listening to this guy for half an hour, Aluo couldn’t stand it any longer. “I stood up and yelled at him: ‘If you like China so much, why’d you leave?! You only came back here to make money for yourself. How are you helping us?’”

The scared investor stepped off the bus, left behind as the bus sped away, beside the last free-flowing river of his homeland.

China's Frontier Towns
Tags in this Story
Share this Story