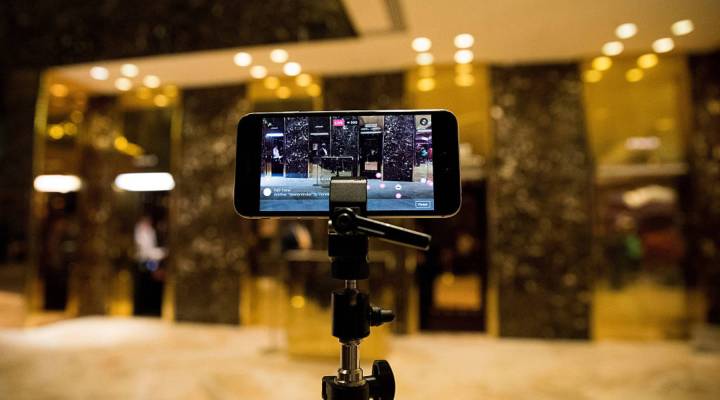 COPY
An iPhone streams a 'Facebook Live' live feed of the lobby at Trump Tower, November 29, 2016 in New York City. President-elect Donald Trump and his transition team are in the process of filling cabinet and other high level positions for the new administration. ( Photo by Drew Angerer/Getty Images

An iPhone streams a 'Facebook Live' live feed of the lobby at Trump Tower, November 29, 2016 in New York City. President-elect Donald Trump and his transition team are in the process of filling cabinet and other high level positions for the new administration. ( Photo by Drew Angerer/Getty Images
Listen Now

This holiday season, you might have considered getting some gadgets for your loved ones. But according to Farhad Manjoo, Tech Writer for the New York Times, gadgets are a thing of the past.

He wrote the article: “The Gadget Apocalypse is Upon Us” and talked with us about why he thinks gadgets are not relevant anymore.

On the decline of gadgets:

I mean, it’s been declining for a while, it’s just been the case that I just haven’t seen any hardware products that have really excited me. The one— I can think of a couple exceptions, but they’re exceptions for a reason. The Amazon Echo is something I use a lot. But it’s barely a gadget, it’s just sort of a cylinder you put in your kitchen and almost all of its intelligence is in the cloud and software. The new gadgets, sort of, exist mainly as accessories to the smart phone.

On what a gadget really constitutes:

I think that gadgets will, sort of, never have the central place in our lives the way, you know, the way the Walkman did, or the GameBoy, or the iPod… you know, the iPod was a gadget. I wouldn’t call a smart thermostat a gadget. It just feels like it’s a better thermostat than the old days. So, we are kind of redefining what a gadget means and the redefinition is basically like everything is now connected and the smart phone is the one that controls everything.