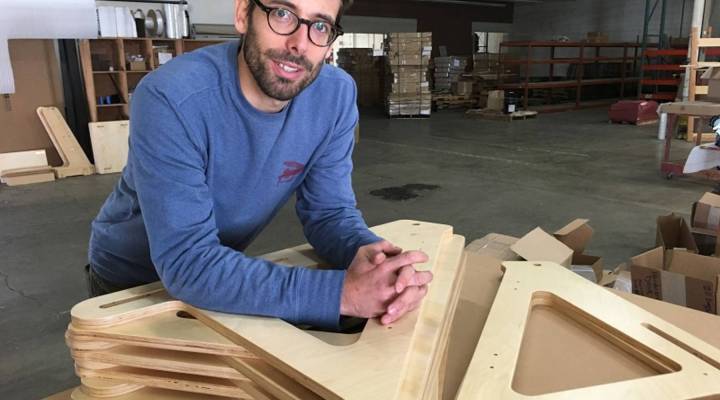 Mathias Ellegiers is head of an Akron-based startup called Jaswig. He designed an adjustable standing desk — he says it’s healthier than sitting all day.

At a shop in Cleveland, the components of his wooden desk are routed out of sheets of Baltic birch plywood. Ellegiers didn’t bring any drawings. Instead, “We sent them the file through email,” he said.

A router in Cleveland, Ohio with just a few adjustments, can produce a product from a digital file without being programmed by an operator.

It contains the design for the desk and instructions for the cuts, “like an application that you use on an iPhone,” said Ellegiers. And after a few quality checks, the machine whirls them out.

Shop floors are changing across America. A decade ago a designer would have sent a stack of drawings and a hand-made model to show how a part was built. Now, some can send an app and the machine cranks it out. At least, that’s the goal of digital manufacturing.

Ellegiers plans to replicate this model all over the world by sending a digital file to local wood shops close to where the desks are sold. “Digital manufacturing,” he said, “means you have a very standardized system for you product using that code file, that can be made in every city of the U.S., Europe, Australia, and China.”

But he’s hitting a roadblock. “Most workshops still expect to get a print,” said Ellegiers.

DMII is a public/private effort to speed American manufacturing’s transition into the digital age. The goal, Harris said, is to network every part of the manufacturing chain — from suppliers, to fabricators, to distributors — through what he calls the “digital thread.”

The digital thread, Harris said, captures the data produced by every step of the manufacturing process and puts it to work for you, “from concept of the design through the end of life of whatever product or system you’re talking about.”

But parts of that thread are pretty frayed.

Most small manufacturers — a big chunk of the nation’s supply chain — are running older, pre-Internet equipment. “One of the issues we have to address,” said Harris, “is this legacy equipment.”

The digital thread can be hard to trace in an entrepreneur like Ellegiers’ plan to ship an app for making a desk, instead of a finished product.

“Most shops are definitely not ready for this,” Ellegiers said.

Correction: A previous version of this story misstated the name of the Digital Manufacturing and Design Innovation Institute. The text has been updated.