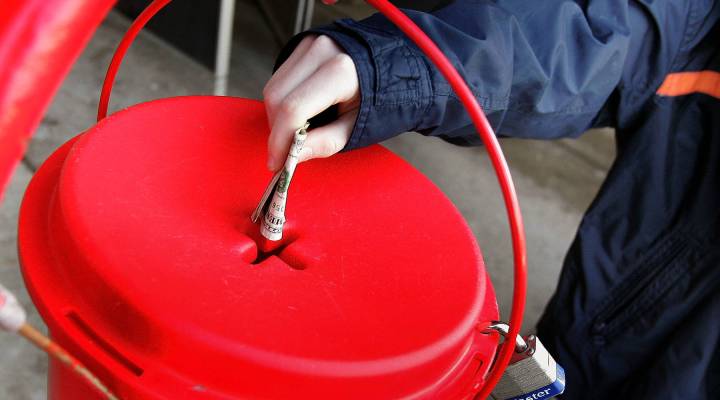 Behind the holiday: A red kettle bell ringer

Behind the holiday: A red kettle bell ringer

Each year, the Salvation Army dispatches thousands of volunteers bearing red kettles to street corners and shopping malls across the country to collect donations. The tradition dates back to the late 1800s, when a Salvation Army Captain, Joseph McFee, dreamed up the kettle collection as a way to pay for Christmas dinner for impoverished residents of San Francisco.

Today, Salvation Army Captain Gerardo Balmori is carrying on the tradition. Even in the blur of Rockefeller Plaza, with rushed shoppers, selfie-snapping tourists and harried mid-town workers trying to make it home, the sight of Balmori singing and dancing to Christmas carols while ringing golden hand bells, causes folks to slow down.

“It feels so wonderful to see everyone smiling and start dancing,” Balmori said. “They get excited and want to dance with us!”

The more he dances and the louder he sings, the bigger the crowd grows. People stream to his kettle to throw in a donation. On a recent evening, Balmori said he had filled one kettle, which typically holds $600 – $700, after only an hour.

Balmori describes his involvement with the Salvation Army as a bit of serendipity. He and his family are immigrants from Mexico. When they arrived in Pennsylvania in the 1990s, he got a job as a woodworker but he couldn’t make ends meet. He, his wife, and his two young children were going hungry. Then, the Salvation Army stepped in.

“I think they find out about our situation and then the pastor, Richard Lopez, one night he decided just to brought us a box of food,” said Balmori. “We were very happy because we were struggling financially. We got nothing to eat until the next week.”

Now, he works for the Salvation Army full-time as an officer and pastor and has been manning the holiday kettles for 19 years.

It was, he says, like the whole world had joined in.