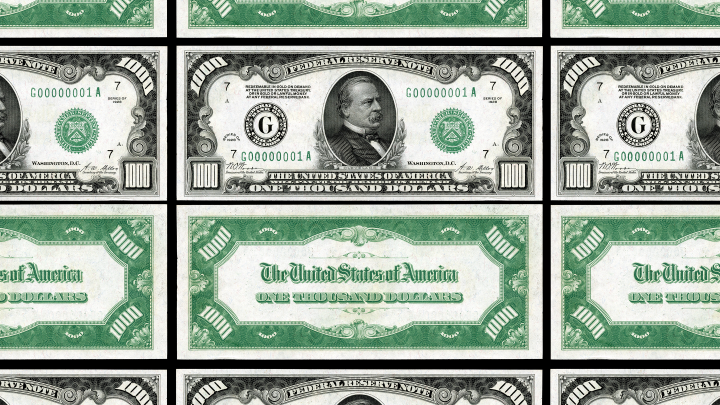 In the early 1900s, a bottle of Coke cost a nickel, a Ford Model T could fetch $290 and some apartment rents dipped as low as $4 a month.

So it might sound intuitive that now we’d have larger bills to make the purchasing process more convenient, more efficient.

That’s why listener Rabin’ Monroe wrote in with the question, “Why aren’t we using $1,000 bills anymore? Seems more appropriate to use them now than back in the early 20th century.”

The first known use of the $1,000 bill coincides with the United States’ beginnings.

The Continental Congress, a body of delegates representing the 13 colonies, began issuing paper money, which included the $1,000 bill, to help finance the Revolutionary War, said Matthew Wittmann, an assistant curator at the American Numismatic Society, an organization that studies coins and currency.

But back then, it was only worth a fraction of that value, he added.

“So this $1,000 note seems incredible, but what it reflects is actually how little paper dollars were valued,” Wittmann said. “It might only have been worth $20 in ‘real’ hard money at the time.”

Lee Ohanian, an economics professor at the University of California, Los Angeles, said the bill was used to rapidly purchase supplies like ammunitions during the war.

In the decades after, the $1,000 bill and other large-denomination currencies were mostly used in real estate deals or interbank transfers, Ohanian said.

“They facilitated really, really large financial transactions that primarily were being carried out between banks or other financial intermediaries,” Ohanian said. “So it made life a little bit easier.”

The U.S. stopped printing the $1,000 bill and larger denominations by 1946, but these bills continued circulating until the Federal Reserve decided to recall them in 1969, Forgue said.

Forgue said President Richard Nixon thought these denominations would make it easier for criminals to launder money, which then led to his order for their elimination.

Plus, turns out churning out $1,000 bills just wasn’t very cost efficient. To produce them, you’d have to go through the trouble of engraving new plates for very small production runs, Wittmann said. Running off a lot of $1 notes is more cost efficient than producing comparatively few $1,000 notes, he added.

Is there a chance we could bring the note back? It’s only likely if there are big problems within the economy, Wittmann said. The circulation of large denominations of currency is almost always due to inflation or depreciation, he said.

Take a look at Zimbabwe, which has issued million-, billion- and trillion-dollar notes. One $100 trillion note from the southern African country is worth 40 U.S. cents.

Or take a step back to Germany in the early  ‘20s, known then as the Weimar Republic, when hyperinflation hit the country. That’s when 4.2 trillion marks were equivalent to a dollar.

“If you didn’t have your credit card, you didn’t have your debit card, or there’s a massive meltdown of the world in telecommunication systems and computers … then you can imagine high-denomination bills would be very useful,” Ohanian said. “Assuming the other person wants to accept it.”

Yes, concerns about counterfeiting could be an issue. Even the use of current large denominations — $50 and $100 bills — can raise questions about their authenticity at the cash register.

If you’re lucky enough to come across a $1,000 bill, you could technically take it to the bank for $1,000 in credit, but the bank would then send it to the Federal Reserve, which would prevent it from recirculating, Wittmann said.

Plus, many $1,000 bills are worth far more than the noted amount, Wittmann added.